Philadelphia Hospital for the Insane, Philadelphia, PA c. 1900The history of psychiatric hospitals was once tied tightly to that of all American hospitals. Those who supported the creation of the first early-eighteenth-century public and private hospitals recognized that one important mission would be the care and treatment of those with severe symptoms of mental illnesses. Like most physically sick men and women, such individuals remained with their families and received treatment in their homes. Their communities showed significant tolerance for what they saw as strange thoughts and behaviors.  But some such individuals seemed too violent or disruptive to remain at home or in their communities. In East Coast cities, both public almshouses and private hospitals set aside separate wards for the mentally ill. Private hospitals, in fact, depended on the money paid by wealthier families to care for their mentally ill husbands, wives, sons, and daughters to support their main charitable mission of caring for the physically sick poor.

But the opening decades of the nineteenth-century brought to the United States new European ideas about the care and treatment of the mentally ill. These ideas, soon to be called “moral treatment,” promised a cure for mental illnesses to those who sought treatment in a very new kind of institution—an “asylum.” The moral treatment of the insane was built on the assumption that those suffering from mental illness could find their way to recovery and an eventual cure if treated kindly and in ways that appealed to the parts of their minds that remained rational. It repudiated the use of harsh restraints and long periods of isolation that had been used to manage the most destructive behaviors of mentally ill individuals. It depended instead on specially constructed hospitals that provided quiet, secluded, and peaceful country settings; opportunities for meaningful work and recreation; a system of privileges and rewards for rational behaviors; and gentler kinds of restraints used for shorter periods.

Many of the more prestigious private hospitals tried to implement some parts of moral treatment on the wards that held mentally ill patients. But the Friends Asylum, established by Philadelphia’s Quaker community in 1814, was the first institution specially built to implement the full program of moral treatment. The Friends Asylum remained unique in that it was run by a lay staff rather than by medical men and women. The private institutions that quickly followed, by contrast, chose physicians as administrators. But they all chose quiet and secluded sites for these new hospitals to which they would transfer their insane patients. Massachusetts General Hospital built the McLean Hospital outside of Boston in 1811; the New York Hospital built the Bloomingdale Insane Asylum in Morningside Heights in upper Manhattan in 1816; and the Pennsylvania Hospital established the Institute of the Pennsylvania Hospital across the river from the city in 1841. Thomas Kirkbride, the influential medical superintendent of the Institute of the Pennsylvania Hospital, developed what quickly became known as the “Kirkbride Plan” for how hospitals devoted to moral treatment should be built and organized. This plan, the prototype for many future private and public insane asylums, called for no more than 250 patients living in a building with a central core and long, rambling wings arranged to provide sunshine and fresh air as well as privacy and comfort.

Occupational Therapy Group, Philadelphia Hospital for Mental Diseases, Thirty-fourth and Pine StreetsWith both the ideas and the structures established, reformers throughout the United States urged that the treatment available to those who could afford private care now be provided to poorer insane men and women. Dorothea Dix, a New England school teacher, became the most prominent voice and the most visible presence in this campaign. Dix travelled throughout the country in the 1850s and 1860s testifying in state after state about the plight of their mentally ill citizens and the cures that a newly created state asylum, built along the Kirkbride plan and practicing moral treatment, promised. By the 1870s virtually all states had one or more such asylums funded by state tax dollars.

By the 1890s, however, these institutions were all under siege. Economic considerations played a substantial role in this assault. Local governments could avoid the costs of caring for the elderly residents in almshouses or public hospitals by redefining what was then termed “senility” as a psychiatric problem and sending these men and women to state-supported asylums. Not surprisingly, the numbers of patients in the asylums grew exponentially, well beyond both available capacity and the willingness of states to provide the financial resources necessary to provide acceptable care. But therapeutic considerations also played a role. The promise of moral treatment confronted the reality that many patients, particularly if they experienced some form of dementia, either could not or did not respond when placed in an asylum environment.

Philadelphia Hospital for the Insane, Philadelphia, PA c. 1900The medical superintendents of asylums took such critiques seriously. Their most significant effort to improve the quality of the care of their patients was the establishment of nurses’ training schools within their institutions. Nurses’ training schools, first established in American general hospitals in the 1860s and 1870s, had already proved critical to the success of these particular hospitals, and asylum superintendents hoped they would do the same for their institutions. These administrators took an unusual step. Rather than following an accepted European model in which those who trained as nurses in psychiatric institutions sat for a separate credentialing exam and carried a different title, they insisted that all nurses who trained in their psychiatric institutions sit for the same exam as those who trained in general hospitals and carry the same title of “registered nurse.” Leaders of the nascent American Nurses Association fought hard to prevent this, arguing that those who trained in asylums lacked the necessary medical, surgical, and obstetric experiences common to general-hospital-trained nurses. But they could not prevail politically. It would be decades before American nursing leaders had the necessary social and political weight to ensure that all training school graduates—irrespective of the site of their training—had comparable clinical and classroom experiences. 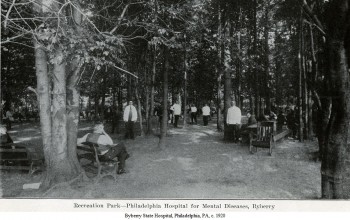 Byberry State Hospital, Philadelphia, PA c. 1920It is, at present, hard to assess the impact of nurses’ training schools on the actual care of patients in psychiatric institutions. In some larger public institutions, the students worked only on particular wards. It does seem that they had a more substantive impact on the care of patients in much smaller and private psychiatric hospitals where they had more contact with more patients. Still, it may be that their most enduring contribution was opening the practice of professional nursing to men. Training schools in asylums, unlike those in general hospitals, actively welcomed men. Male students found places either in schools that also accepted women or in separate schools formed just for them.

Training schools for nurses, however, could not stop the assault on psychiatric asylums. The economic crisis of the 1930s drastically cut state appropriations, and World War II created acute shortages of personnel. Psychiatrists, themselves, began looking for other practice opportunities by more closely identifying with general, more reductionistic, medicine. Some established separate programs—often called “psychopathic hospitals”—within general hospitals to treat patients suffering from acute mental illnesses. Others turned to the early-twentieth-century’s new Mental Hygiene Movement and created outpatient clinics and new forms of private practice focused on actively preventing the disorders that might result in a psychiatric hospitalization. And still others experimented with new forms of therapies that posited brain pathology as a cause of mental illness in the same way that medical doctors posited pathology in other body organs as the cause of physical symptoms: they tried insulin and electric shock therapies, psychosurgery, and different kinds of medications.

By the 1950s, the death knell for psychiatric asylums had sounded. A new system of nursing homes would meet the needs of vulnerable elders. A new medication, chlorpromazine, offered hopes of curing the most persistent and severe psychiatric symptoms. And a new system of mental health care, the community mental health system, would return those suffering from mental illnesses to their families and their communities.

Today, only a small number of the historic public and private psychiatric hospitals exist. Psychiatric care and treatment are now delivered through a web of services including crisis services, short-term and general-hospital-based acute psychiatric care units, and outpatient services ranging from twenty-four-hour assisted living environments to clinics and clinicians’ offices offering a range of psychopharmacological and psychotherapeutic treatments. The quality and availability of these outpatient services vary widely, leading some historians and policy experts to wonder if “asylums,” in the true sense of the word, might be still needed for the most vulnerable individuals who need supportive living environments.