Amy Orrego enjoys a challenge. The married mother of two young children, ages four and one, is not only an Advanced Practice Provider in Cardiac Electrophysiology with the MedStar Heart and Vascular Institute in Fairfax, Virginia—rounding on inpatients who require rhythm management at five different hospitals—she is also a Staff Development/Clinical nurse with the 113th Medical Group, District of Columbia Air National Guard at Joint Base Andrews, Maryland.

“I commissioned in the Air Force straight out of nursing school,” Amy says, “so after graduating from Penn, I completed Commissioned Officer Training. I saw joining the military as a great opportunity to challenge myself.” She was assigned as a medical-surgical nurse, and after completing a ten-week Nurse Transition Program she went to her permanent duty station to work on a med-surg floor caring for active duty and retirees. “In general, military nurses do the same things a civilian nurse does—we care for similar patients.”

Except that, in Amy’s case, she would come to provide care for patients in Afghanistan during Operating Enduring Freedom.

“I was accepted into a critical care fellowship program,” she says, “and after a year-long training, I graduated and was shortly deployed to Afghanistan. Luckily we were in a relatively protected facility, so we were not facing constant danger—although we did experience the occasional mortar attacks. Two years later, I deployed again, this time to Iraq.” In Iraq, Amy was part of a Critical Care Air Transport Team (CCAT) that flew 35 critical patients (medical and trauma) in 27 combat missions, and she was awarded the Aerial Achievement Medal for her team’s incredible contributions to the mission.

“Flying as a critical care air transport nurse was one of the most rewarding experiences of my nursing career,” Amy says. “I loved the unpredictability of my job as well as how fulfilling it was to bring the injured warriors one step closer to home. We might get inaccurate or incomplete information on patients, or would be heading back to base from another mission only to be told we have another patient and had to turn around and do it all over again. The job required a lot of planning ahead, anticipating worse possible scenarios so that we wouldn’t be caught short of supplies or equipment.”

She recalls one notable mission after a mass-casualty event on base. “It was a rare mission where they activated 2 CCAT teams to fly the patients to Germany. Many of the patients were from the same unit, and they could clearly see that some of their friends were critically injured. Imagine flying for five or six hours having to watch your fellow unit member unresponsive with all sorts of tubes and equipment on him. It was traumatic for the wounded warriors, and heartbreaking for us to witness.”

Amy commissioned as a 2nd lieutenant in the Air Force and served nine active duty years. Since then she has served in the Traditional Reserve and the District of Columbia Air National Guard. And while Amy wanted to be a nurse as a child, becoming a nurse and serving in the military were not always what she expected her future to look like. “When I graduated from high school, I was set on becoming a dolphin trainer and earned a bachelor’s degree in Biology. During my junior year as an undergraduate, though, I realized that I wanted to work with patients—and knew that I would pursue my second degree at Penn Nursing. Graduating from Penn with my BSN had a large impact on my passion for higher education and evidence-based practice, and I have always had a goal of attaining the terminal degree in my field.” Post-Penn Nursing, Amy has gone on to earn a Master’s in Health Care Management and a Doctorate in Nursing Practice.

Amy is committed to remaining in clinical practice but would also like to go into academia. But that’s not all her future might hold. After all, she does like a challenge. “Nurses should be at the forefront of health policy,” she says, “because we know what patients need, what works, and what is a waste of time and money—so I’d like to see more nurses in leadership roles in both the local and federal government. I have myself thought about running for an elected office once I am no longer in the military and my children are a little more self-sufficient.”

Random fact: “I spent some time in a Japanese aquarium observing dolphin behavior when I still wanted to be a trainer. As part of that “perk,” I prepped fish for these dolphins by disemboweling the fish—with my bare hands! I was at a Japanese aquarium because I lived in Japan for many years and speak Japanese. I graduated from a small international school with a graduating class of 12 students!” 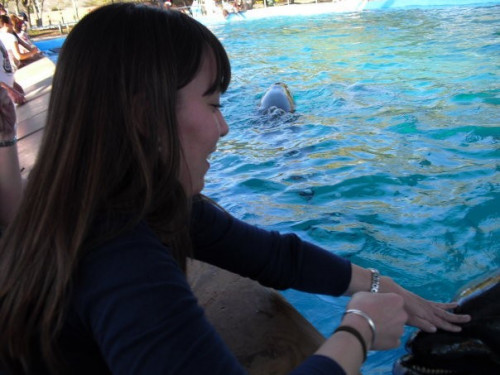