Monica Phann got critical help from exactly the right people. And now she’s giving back.

Penn Nursing student Monica Phann grew up in a library, almost literally. The building, which houses a community center, sat right across the street from her family’s house in Philadelphia. Monica spent her childhood in a big Cambodian, or Khmer, community roughly bounded by the blocks of Sixth and Seventh Streets between Morris Street and Oregon Avenue. While connected to Center City, the neighborhood feels a world away. Many residents don’t speak English and Monica herself spoke only Khmer until second grade. “The library is the one place that our parents knew would have a positive impact on their children’s lives, and so my friends and I grew up meeting there. We could go to the library and get help with homework since our parents didn’t speak English and weren’t able to provide that for us at home,” she explains.

She credits the library, along with some timely mentoring, for her academic success. Next spring, the first-generation American will become the first member of her family to graduate from college.

The lives of her parents had taken a very different path, having survived the terror of the Pol Pot regime of the 1970s. Two million Cambodians died during that era from starvation, disease, work exhaustion, and execution. Monica’s father’s parents were killed. Her mother’s six siblings didn’t survive. The two were admitted to the United States as refugees, eventually settling in South Philadelphia where they met. Both found work on a blueberry farm in New Jersey, working long hours for little compensation.

The family had plenty of company among Cambodian immigrants. This part of South Philadelphia has enough of a concentration to earn the informal (and, if some residents have their way, formal) name of Cambodia Town. “Growing up at home and going to my neighborhood school, I was around the same people all the time,” Monica says. “I went to school with friends who were also Khmer, and the teachers were well aware that there was a huge population of us in South Philly.” Middle school, where Monica was the only Khmer student, came as a shock. “Going from an environment where you are surrounded by people who are just like you to an environment where everyone is different was very high stress.”

The obstacles can be overwhelming for first-generation Khmer. More than 35 percent of Cambodian adults in America lack a high school diploma or equivalent; fewer than 15 percent achieve a bachelor’s degree. Fortunately, when Monica entered high school, she got timely help in the form of understanding counselors.

Monica’s counselors helped her pick the right AP classes. When the SATs loomed, they helped connect her to preparation resources. Penn also provided crucial help. While still in high school, Monica participated in the Provost’s Summer Mentorship Program (SMP). By providing support throughout the academic year, the program helps prepare high-school students to graduate on time and matriculate to a post-secondary institution. Students also attend supplemental academic and life-skills programming throughout their sophomore, junior, and senior years.

The help didn’t stop there. When Monica was accepted into Penn’s College of Arts and Sciences, her high school counselors suggested she apply for the Mayor’s Scholarship—a financial aid grant for local Philadelphia students that meets 100 percent of their determined need. “A lot of people from my community don’t consider higher education because they are so afraid of loans,” Monica says. “They think it is safer to go straight into a job.” Without financial aid, Monica might have had to skip college. “My family and I wouldn’t be able to afford it,” she says.

When she got to Penn, she became an SMP mentor herself. “I knew I had to give back to this program. They’ve done more for me than I or my parents could have.”

But she also continued to have mentors of her own. 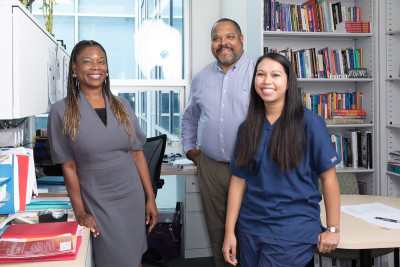 Credit: Photography by Colin LentonAssociate Professor of Nursing. “I’ve been to Dr. Johnson and Dr. Lewis’s office so many times,” Monica says. “They check in to make sure I’m doing all right, and just having that constant support from them, I know that I’m not alone and that I can do this,” says Monica. But it’s about more than moral support. “Having two-way communication with my mentors is a great reminder that I can achieve success just like they have.”

Monica’s relationships with Johnson and Lewis grew organically, and according to Johnson, that’s the best way for it to happen. He feels that when a student or employee is matched to a mentor, it often doesn’t work. “It goes both ways. The mentor has to want to do it, the mentee has to want it, personalities have to mesh, and both sides need to have something to offer.” He says Monica “is easy to mentor. She is genuine and appreciative, and I truly want the best for her.”

“Monica and I have really connected over shared experiences and interests,” says Lewis. “She was my student first and had reached out after some content I shared in class really resonated with her on a personal level. Now, we brainstorm together, debrief after exams; I help her navigate the big Penn system, connect her to resources she might not know about. It has been so rewarding for me as well.”

Monica had decided to transfer to the Nursing School just two weeks into her freshman year. It was a natural fit. She had grown up with aging grandparents living in her home and many of her extended family members living nearby. When still a little girl, she began accompanying them to nursing or hospital appointments and, as she learned English, serving as interpreter. “In a way, I’ve been a nursing student from the age of five,” she says. This responsibility helped drive her interest in community health—starting with her own family and continuing with patients. When she visited her aunt, she found all of her pills out of their bottles, jumbled together in a single bag. “This is very common among the Cambodian population,” Monica says. “It’s scary to see people, let alone your family, taking meds without knowing the correct dosage or why they’re taking them.”

In other words, where once she was on the receiving end, now she is the one providing timely aid. “In a way, I’m starting to flip things now. I’ve got the skills and I need to be able to give back because there are so many people in the same position I’ve been in. If someone has a nurse to help them move through their situation, they aren’t alone.”

The desire to be a good mentor is the first step!

The “how to become a good mentor” comes second. I have used the mentoring insights I gained from my own mentors, along with readings and seminars on the topic in combination with my own personality to develop my mentoring style.

The more time and intention you spend, the better you can become.

My style of mentorship is very relational. I spend time with my mentees getting to know each one through sharing, learning, engaging, and informing. It is a wonderful two-way exchange.

I do not believe you can be a true mentor if you do not honestly like and appreciate your mentee. I also do not share the exchanges with others unless necessary for my mentee’s support.

Mentoring is not one-size fits all.

Mentoring is not about making clones but about advancing individuals to move into their own life’s work.