The State of Scope of Practice

When will advanced practice nurses work to the full extent of their expertise, in every U.S. state and territory? Here’s an update.

More than a century after states began regulating the profession through nurse practice acts, more and more are expanding the ability of nurse practitioners and other advanced practice nurses to diagnose, treat, and prescribe to patients under the authority of the state board of nursing—free of the supervision of a physician. So far, 22 states and the District of Columbia meet the definition of “full practice” set by the American Association of Nurse Practitioners. Among those states with “reduced practice,” requiring a collaborative agreement with a physician: the Commonwealth of Pennsylvania. NPs educated at the world’s top nursing school face the choice of working under less than full practice authority, or leaving the state. This, despite having taken national certification exams and having been trained under national accreditation standards.

The most restrictive states require collaborative agreements with MDs, and NPs often have to pay for them—an average of $5,000 to $10,000 a year. Medicare and Medicaid reimbursement policies often pay less than MDs get for the same service (85 percent for Medicare and 75 to 100 percent for Medicaid, depending on the state). Yet, research conducted at Penn shows that even in those states with full practice authority and full Medicaid payments, clinics are actually more likely to include NPs. What’s more, “medical practices that employ NPs have lower fees overall and are more likely to accept Medicaid patients than practices that don’t have NPs,” Aiken says. The very fact she can refer to this data shows the work that Penn Nursing has done to measure the merits of full practice authority. The findings get sent to decision- makers throughout Pennsylvania and beyond, via op-ed pieces and policy briefs, as well as meetings with key stakeholders and legislators.

So why are many states lagging behind? State medical societies, for one thing. “Their number one argument,” says Winifred Quinn, co-leader of a national campaign for AARP, “is that patients would get less quality of care because advanced practice nurses have less education than physicians. APRNs are accused of trying to do everything physicians do. But actually they don’t. They’re trained to do nursing.” And not all physicians oppose full scope of practice. “There are plenty of MDs out there who support this,” Quinn says.

To monitor the trend toward scope of practice, Penn Nursing magazine checked in with some of those closest to the issue.

Pennsylvania: Moving Through the Legislature

For years, bills expanding scope of practice in the Commonwealth got stuck in the House Professional Licensure Committee, whose chair was resistant to scope of practice legislation in general. Now the committee has a new chair, Mark Mustio; and bill sponsor, Jesse Topper. Topper represents Bedford County in the rural south-central part of the state. Topper has a strong reason to push for expanding scope: his county has exactly one primary-care physician.

Rep. Jesse Topper is pushing to expand scope. His county has just one primary care physician.The Senate has already passed an expansion bill, SB25, voting 38-12 in favor of full practice authority for NPs. “The odds in favor are much greater than in years past,” says Hugh Allen, Penn’s senior director of Commonwealth relations. He credits much of the change to stronger advocacy by the nursing community—“specifically academia,” he says. All 44 nursing schools in the Pennsylvania Higher Education Nursing Schools Association aligned on the issue, along with the AARP, the National Governors Association, and the Hospital and Health System Association of Pennsylvania. Penn Nursing Dean Antonia Villarruel spoke at a capitol rally in April; soon after, the Senate voted the bill out of committee.

The House and Senate bills are “nearly identical,” he says. Both would require a probationary period before an NP could practice full scope, entailing collaborative physician agreements with two physicians for three years and a total of 3,600 hours. This compromise, required to get the hospital systems on board, makes it “one of the most conservative full scope of practice bills in the nation,” says Linda Aiken. And yet the Pennsylvania Medical Society remains opposed.

Nonetheless Topper, the House sponsor, hopes to get House Bill 100 out of committee before the end of the year, according to Allen. 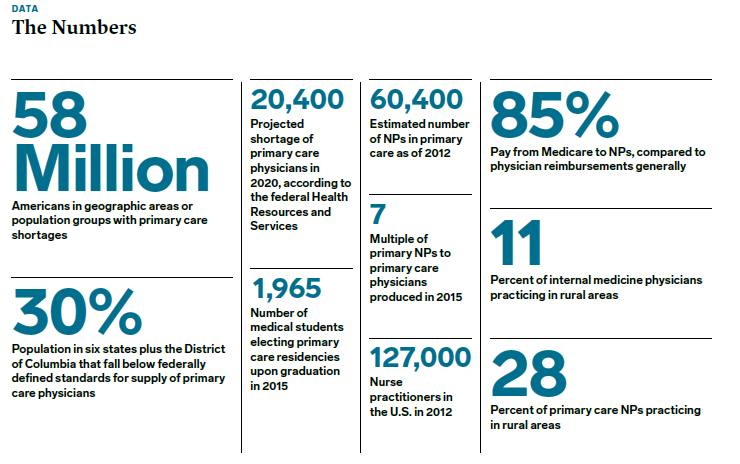 Last December, the VA modernized its APRN scope of practice policies, excluding only certified nurse anesthetists. Before the policies took effect, the required call for letters drew a record amount of mail: 250,000 messages in all. “Veterans, NPs, Members of Congress weighed in, along with a goodly number of the 3.3 million RNs in this country,” says AARP’s Winifred Quinn.

The Free Market Argument for Scope of Practice

Some of the strongest advocates of full practice authority come from policy thought leaders on both ends of the political spectrum, according to Quinn. They include such heavyweights as the American Enterprise Institute, Americans for Prosperity, Cato Institute, and the Heritage Foundation. Among the arguments gleaned from these institutions:

Arguments Against Scope of Practice

Full SOP is dangerous and will reduce quality of care. Response: Decades of evidence, recently noted by the Institute of Medicine and the National Governors Association, demonstrate that nurse practitioners provide safe, effective care when given full practice authority. In its 2012 review of evidence of the quality of care provided by NPs, the National Governors Association found that NPs provided “at least equal quality of care to patients as compared with physicians” in studies measuring patient satisfaction, time spent with patients, prescribing accuracy, the provision of preventive education, and key health outcomes.

An earlier report titled The Future of Nursing, issued by the national Institute of Medicine in 2010, similarly recommended that states allow full scope. The report urged states to follow the National Council of State Boards of Nursing’s Model Nursing Practice Act.

There is no evidence that patient access is improved. Response: By eliminating this unnecessary red tape, nurse practitioners can practice where they are needed. Arizona, for example, saw a 73% increase in NPs in rural and underserved areas in the five years since the state passed a law allowing full practice authority. 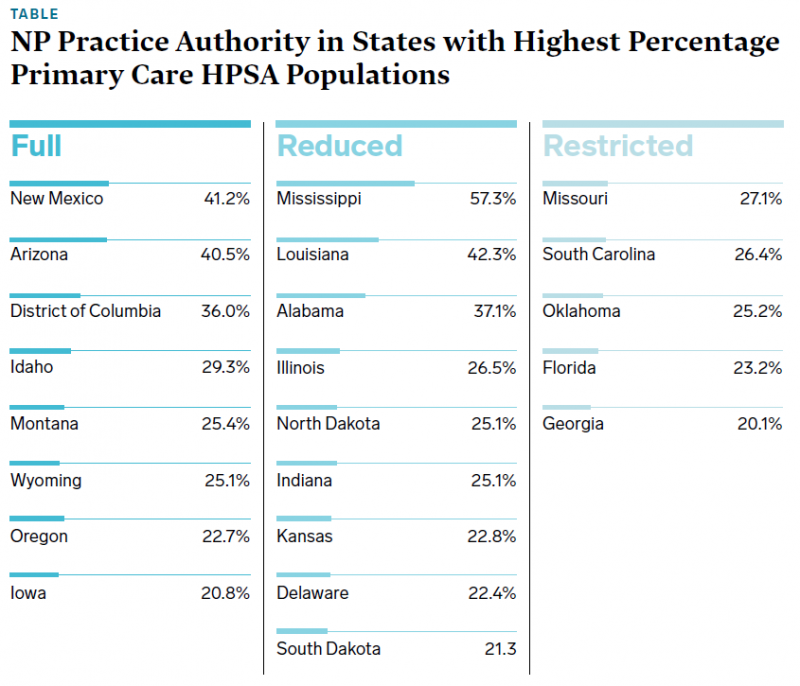 Full Practice: State law provides for nurse practitioners (NPs) to evaluate, diagnose, treat, and prescribe under the exclusive licensure authority of the state board of nursing. This is the model recommended by the Institute of Medicine.

Reduced Practice: State requires NPs to have a regulated collaborative agreement with a physician in order to provide patient care, and limits NPs engagement in at least one element of NP practice.

Restricted Practice: State requires supervision, delegation, or team management by a physician in order for NPs to provide patient care, and limits NP engagement in at least one element of NP practice.