Colada, a type of Cuban espresso that fuels the city of Miami, comes piping hot in a Styrofoam cup accompanied by a stack of thimble-sized shot glasses. You don’t purchase this drink for yourself but instead to share. My first colada shot came from a Miami-Dade police officer standing at the door to the shelter that would quickly become my home and office as a Red Cross volunteer. I lost count of how much was shared with me that week, from simple cups of coffee to life-altering experiences.

A few months ago, after the excitement of graduation and passing my boards wore off I registered with the American Red Cross as a Registered Nurse. Then, as I watched with the rest of the nation as hurricane after hurricane battered the southern U.S., I felt I had something to give, a skill to share.

When Hurricane Irma’s path took a sharp right turn toward Florida, my cell phone rang. On the other end, the Red Cross asked me to deploy to Miami for nine days. I called my partner for the President’s Engagement Prize, Penn Nursing graduate Marcus Henderson, Nu’17, to let him know I’d be gone for a week, then I packed my bag and took the next flight out.

During senior year in the University of Pennsylvania School of Nursing, I participated in a disaster-relief simulation that “deployed” us to Haiti to learn how complex disaster relief efforts operate. Now, as I stepped into an empty warehouse in Orlando with 20 other RNs and paramedics, that simulation suddenly became reality. We received our briefing — and brief it was — then dispersed across the state to offer care and assistance. I was assigned to work in the state’s largest shelter but, despite its enormity, the lead-up note stated simply, “1,200 patients, multiple medical needs, psych, chronic homeless.”

When I arrived at the shelter, I learned I would be one of the three-night shift nurses. For seven straight nights, I worked from 7 p.m. to 7 a.m. caring for the health and safety of hundreds of people at a time.

Quickly I realized that Penn Nursing’s community health programs made me feel comfortable walking through this sea of people to assess who was the sickest. My time spent in the 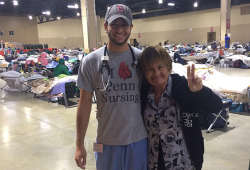 emergency department at the Hospital of the University of Pennsylvania prepared me to treat the blood losses and heart attacks and other unexpecteds. My work with Marcus in several Philadelphia homeless shelters as part of our President’s Engagement Prize project, “Homeless Health and Nursing,” helped me hone my ability to listen to the needs of the community and communicate with those who have fallen into homelessness.

I used these skills during every interaction in the hurricane shelters. The work of listening to each patient’s unique narrative was incredibly similar to the effort that went into creating the project for the President’s Engagement Prize. The skills we developed serving in Philadelphia’s homeless shelters easily transferred to the residents of the hurricane shelters. I was prepared and excited to provide the care they required.

Once the details of this week fade into memory, what will stick with me aren’t the specifics of each case, the walkthroughs to find the sick or even the life-saving moments. Instead it will be the moments shared. I will forever remember the stories of priceless mementos lost, people displaced, houses destroyed. But more than the tragic memories, I will remember the community, the camaraderie, the outstretched arms holding piping hot cups of coffee.

I will remember watching a man hand someone his last pair of socks as he slid his bare feet into his sneakers. I will remember the kindness, generosity, fellowship and love between people who had lost everything. I am forever grateful to Penn for preparing me to provide holistic, compassionate care and the ability to humbly serve these individuals.