There is a growing conversation about nursing PhD programs. We sat down with Penn Nursing’s Julie Fairman to understand why now, what are the opportunities, and what is the potential— for students, health care, and the world.

Want to be a nurse? Find a four-year program and earn your BSN. That’s the directive that many prospective nursing professionals will hear as they weigh their academic options and consider where they want their career paths to lead. Since the 1970s, earning a bachelor’s degree has become increasingly standardized for nurses, at the behest of organizations such as the National League for Nursing and the Institute of Medicine. The thinking here is that a four-year education in nursing science better equips the average student for the array of challenges they’ll almost certainly encounter in clinical settings—enhancing patient care and improving outcomes.

But higher education is much more vast than the framework of a bachelor’s program. If a BSN can augment the quality of nursing care, what about a PhD?

This is just what Julie Fairman phd rn faan, the Nightingale Professor in Honor of Nursing Veterans, Chair of the Department of Biobehavioral Health Sciences, and Director of the Robert Wood Johnson Foundation’s Future of Nursing Scholars program, wants to know. Fairman studies how historic events have changed the way nursing care is delivered—and how nurses themselves have become more autonomous and received greater recognition for the vital role they play in patient outcomes. As the impact of nursing care becomes glaringly clear, it’s time to re-imagine the standard educational model for nursing professionals. It’s time to talk about where the nursing PhD can take students, and how it could further transform health care.

The nursing education landscape has changed a lot in the last few decades, thanks to the focus on baccalaureate degrees and the explosion of online programs. But how does the PhD fit into this contemporary landscape?

And why does it matter? Well, the PhD is usually seen as a research role, and it has fit in as a way to provide the evidence for improving patient care. It’s the development and invention of the knowledge base. Health care has gotten so much more complex. It requires a great deal of critical thinking. Nurses’ roles have changed. They’re more independent. They’re recognized as the reason patients actually recover when they’re in a hospital. Nursing was the profession that made home care a reality, where you were able to move patients out of the hospital quicker, and they could be cared for right in their homes, by visiting nurse associations. However, the number of people in PhD programs is not growing. It’s been stagnant over the last 10 years, which is one of the reasons the RWJ Future of Nursing Scholars Program has been working to get candidates into programs faster.

What are some of the factors behind this stagnation of enrollment in PhD programs?

While not necessarily true at Penn Nursing, on a national level, we’re seeing a decline in the number of applicants to the programs. There are funding challenges. We’re at a point where we really need to re-envision how we prepare people for scientific and academic roles in nursing. And Penn Nursing is incredibly well positioned to do this because we participate in three of the major programs that have been developed to increase the PhD pipeline: the Hillman Scholars Program, the Robert Wood Johnson Foundation’s Future of Nursing Scholars (FNS) program.

Can you expand on the utility of these programs? How do they help students pursue a nursing PhD?

All three of these programs provide funding and mentorship. Hillman, for example, is a really innovative program that focuses primarily on students who were already in baccalaureate programs. They receive tuition coverage and stipends. It’s the same thing for the Future of Nursing Scholars program. This is a $20 million-plus program. The program offered $75,000 cash to students, and the home school was required to provide $50,000 to support their program scholars for an accelerated three-year PhD. To further support the scholars, we also provided leadership training. The FNS program has supported more than 200 nursing PhD candidates across the country. I think that exemplifies how Penn has really been at the forefront of PhD education. The RWJ Future Scholars program’s head office—as well as the Hillman Scholars head office—is based right here.

So, we’ve reached a point where there are literal initiatives for a majority of nurses to have BSNs by the year 2020. In theory, could we get to a point where a similar initiative for PhDs in nursing develops? What do you think it would take to get there?

There’s still not much talk about this except what came out of the IOM’s 2010 Future of Nursing report. The recommendation was to double the number of doctorates in the field. The DNP has achieved this goal, but the PhD really needs more attention—and a re-envisioning— in order to help us understand what research-intensive programs should be doing to effectively create the nurse-scientists of the future and improve patient care. That’s a conversation we need to have.

Speaking of conversations, you also helped organize Penn’s recent PhD Education Summit. What were some of the more salient takeaways from this event?

One of the top priorities of the summit was starting a dialogue about the future of PhD education in research-intensive schools. The Dean and I were co-conveners for the summit, we worked with an incredible group of faculty, and we also partnered with the PAHO Group (Pan American Health Organization) because we think that we actually have a lot to learn from other countries about how they educate nurse scientists. The PAHO Group has been doing three-year PhD programs for a while, but in general, one of the things we learned from the summit is that people are really hungry to talk about this right now. We saw feedback from the participants to the effect of, “This is great. Keep it going. Can we keep doing this for the next three years?” And that was really invigorating to us. The fact that people really want to have this conversation right now. We haven’t moved the PhD graduation needle much, and since there’s so much happening in the science space—in genetics, phenomics, or data science, for instance—all kinds of new methodologies are being used, inside and outside of nursing. This raises the question of how we help more people in nursing fields partner with these other disciplines. 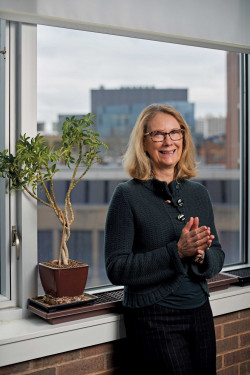 So how does one move the needle? What strategies and factors have you seen moving it forward and bringing more scholars into the PhD program landscape?

One thing we’ve found in the FNS program is that a potential nursing PhD candidate really needs someone to take an interest in them and push them a little bit into a PhD program. From our first two cohorts, we found that a lot of the scholars who entered our program from all over the country had someone who said, “You know, you really need to get a PhD.” That was one of the things that I think we can use as a strategy for building the pipeline. Consistent mentorship is a very important foundation of a good PhD program in general. This is really an incredible time for us to stop and think about how and what we want to produce, what we want these scholars to be able to do, and how we can support them. Mentorship is a key component of successful programs that produce successful graduates.

That’s probably the question many prospective candidates are asking themselves. What can I do with a nursing PhD?

I was just looking at the data from our first two cohorts. Most of them did postdocs and will be the next generation of nurse scientists. Some went right into tenure-track faculty roles (and there is a faculty shortage). Others chose clinical roles, or positions in the federal government. A PhD actually gives you incredible breadth of opportunity, not just academic possibilities, even though we in academia do want and need those nurse scientists. A PhD can allow you to develop the skills to be able to go into a policy role, or an administrative leadership role. In its best form, a PhD is a scientist leadership development program. There’s really very little that you can’t do with a PhD.