Catherine McDonald, PHD, RN, FAAN, an assistant professor at both Penn Nursing and Penn Medicine, shares findings from her latest study, “Factors Associated with Cell Phone Use While Driving in a Survey of Parents and Caregivers of Children ages 4-10 Years,” published in The Journal of Pediatrics.

When we think about distracted driving much of the focus is, appropriately, placed on teen drivers and cell phones. But what about child passengers driving with a distracted parent or caregiver?

We know from prior research that distracted driving from cell phone use is associated with higher crash risk. The current study, sponsored by the Center for Child Injury Prevention Studies (CChIPS), provides further evidence that parents are driving distracted while their young children are in the car, such as texting or using social media. When parents engage in these behaviors while driving with their children in the car, they are not only placing themselves in dangerous driving situations, but they are also modeling these unsafe behaviors for their children to see.

The 4- to- 10-year-old age range was selected for this study in part because this time period can represent several points of transition in terms of child passenger safety, from a forward-facing child restraint system (CRS) to a booster seat to an adult seat belt. When we asked parents the type of CRS they typically use for their child and about the frequency of using that same type of restraint for each trip, 14.5 percent of parents reported inconsistent use of their typical CRS, which has been established as increasing a child’s risk for injury. 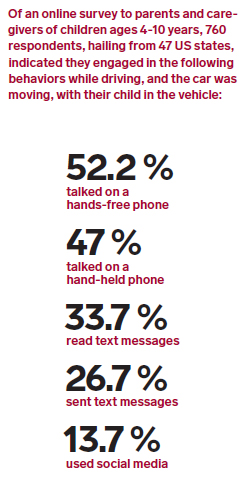 We also found a correlation between parents engaging in other risky driving behaviors whether or not children were present in the car, such as not wearing a seat belt and driving under the influence of alcohol, and cell phone use while driving while their children were in the car. This “clustering of risks” points to an important opportunity to educate parents through well-child visits to their health care provider. When clinicians are discussing child passenger safety with families, they can use the opportunity to ask and educate about parental driving behaviors such as seat belt use and cell phone use while driving.

It is important to note that even parents who did not report engaging in these other risky driving behaviors still used their cell phones while driving. We know people want to stay connected to others as often as possible, and that technology is constantly changing to become more accessible. However, parents should consider that staying off of their cell phones while driving is an important habit to maintain, whether or not their child is in the vehicle. Further research is needed to better understand if observing the distracted driving behaviors of parents influences adolescents when they become young drivers.

A version of this originally appeared on the Center for Injury Research and Prevention (CIRP) at Children’s Hospital of Philadelphia Research in Action blog.

The authors would like to acknowledge the National Science Foundation (NSF) Center for Child Injury Prevention Studies at the Children’s Hospital of Philadelphia (CHOP) for sponsoring this study and its Industry Advisory Board (IAB) members for their support, valuable input, and advice. This material is also based upon work supported by the National Science Foundation under grant number EEC-1460927.