Nurses and nursing developed alongside the fight for women’s suffrage, and the struggle to improve conditions for the poor and the dispossessed. 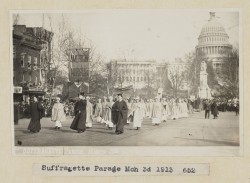 Photo credit: Suffragette parade Mch. 3d. Washington D.C, 1913. [Mar. 3. Washington, D.C.: lGeorge Grantham Bain, 3 March] Photograph. https://www.loc.gov/item/2001704194/ fought for and achieved the right to vote in 1920. Nurses and nursing developed alongside the fight for women’s suffrage, and the struggle to improve conditions for the poor and the dispossessed. Activism, as traditionally defined seeks to promote or direct social, political, or economic change. Activism, as experienced by nurses, opened possibilities for both women in their personal lives, and also for the individuals, families, and communities they served.

Many historians date the emergence of nursing as a modern profession to Florence Nightingale, the well-educated daughter of an English gentry family. Nightingale gained international fame for her care of British soldiers in the Crimean War in the 1850s. Later, her first book, Notes on Hospitals, provided the structure for the Union Army’s hospitals in our own Civil War, and her later, and more famous book, Notes on Nursing, inspired thousands of northern and southern women to volunteer their work to the war effort as nurses.

Yet women who would later turn to nursing as a form of important and consequential work, defied social conventions, arming themselves with an emerging form of new scientific knowledge that differentiated their efforts from other women who nursed families or fallen comrades.

The hospital – long an institution that only served those without any other available resources – had begun to reinvent itself in the late nineteenth century as the site of the best in health care. The availability of specially trained women to nurse its patients quickly emerged as central to this mission. But hospitals now promised more than important work: they promised women access to exciting new forms of knowledge and power that would mark their place as authoritative members of both their health care and social communities. They provided the education to be cool and courageous in fighting social norms that challenged their care of strangers, especially male strangers, and the threats that newly discovered infectious diseases brought.

As the nineteenth century yielded to the twentieth, many of these same nurses brought their knowledge and commitment to bear not only on health but also social issues. These nurses clearly understood the relationships among the conditions in which families lived, the material resources available to them, the access to education offered to their children and their health. But issues of access to and equity in the essential social and health services necessary to allow mothers to raise healthy infants, to help children thrive in school, and to enable breadwinners to remain productive at work remained highly problematic. They came together first in visiting nurse associations, bringing needed care to families unable or unwilling to consider hospital care, but still experiencing acute illness in their own homes.

As nurses came to know these families, they came to also understand that their care in times of illnesses was necessary but not sufficient. They became important activists in such early twentieth movements as urban sanitation, fair employment standards, protective labor laws, public health initiatives, and political enfranchisement. Suffrage was controversial, especially early in the fight for the 19th Amendment. Some nurses wore the label proudly: marching in parades, participating in demonstrations, canvassing friends and colleagues. Others were concerned that overt political involvement would compromise their claims to impartial knowledge and expertise: their involvement in the new public health movement – itself a place of controversy as the state claimed a more central place in the lives of individuals, families, and communities – demanded a certain professional neutrality. 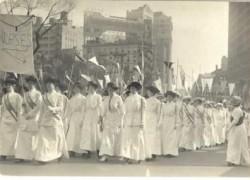 Credit: Medical Center Archives of New York-Presbyterian/Weill CornellAt the same time, the growth of nursing as a responsible and respectable form of work in homes and hospitals also took place within a complicated matrix of race, religion, ethnicity, gender, and geography, that invited some in and left others out. The starkest divisions played themselves out in the segregation that also reflected American society and health care. Nursing was essentially envisioned as a mission for white, middle-class women. Black women who wanted to nurse had to turn to their own black hospitals built to care for patients and train medical students who had no access to white ones. Men had to turn largely to psychiatric hospitals that valued them for their putative strengths. Those born and bred in the southern United States bore a stigma that associated the care of the sick with that of servants and slaves.

The establishment of organizations to promote nursing’s professional claims also reflected these divides.

The National League for Nursing Education (founded 1893), the American Nurses Association (founded 1896), the National Association of Colored Graduate Nurses (founded 1908), and the National Organization for Public Health Nursing (1912) represented different constituencies, with different goal, ambitions, and visions for creating a just and equitable society and health care system. They also represented the same spectrum of social and political attitudes as American society.

Leaders of the National Organization for Public Health Nursing were among the first nurses to embrace the goals of the suffrage movement. They emphasized suffrage as central not only to the empowerment of women, but also of their members; it also would bring access to the political control of nursing’s own development, one often challenged by some physicians and administrators of hospitals.

One such leader, Lavinia Dock, stands as a case in point. Dock, an 1886 graduate of Bellevue Training School for Nurses, one of the founders of the National League for Nurses, and a member of the famous Henry Street Settlement in New York’s City’s lower east side, was one of the most active nurses working for suffrage. She belonged to the National Woman’s Party, was active in civil rights campaigns, and found herself gladly arrested after militant demonstrations in 1917 and 1918. Dock was tireless in bringing the organizations that represented nurses and nursing to the cause of suffrage. Although in 1908, nursing organizations formally voted not to support the 19th Amendment, by 1912 – just four years later – they now voted their support at the national level.

Of course, the grassroots work of convincing the body politic – and all nurses – to support suffrage remained. But it did succeed. And here we may see the enduring power of nursing. Nursing allowed women (and some men) working within different social and racial constraints to construct lives that simultaneously met their own personal ambitions, and, at the same time, encouraged them to move beyond the narrower conventions of their particular times and places.

The Center’s collections highlight the boundaries women as nurses crossed as well as the empowerment they created for themselves and for the profession.

The basic idea of hiring nurses raised profound anxiety about class systems and private versus public spaces. Philadelphia’s nursing pioneers changed the idea of hiring nurses for quality care both at home and in hospitals. In doing so, they, and the institutions they served, created new and respected opportunities for service to the sick as well as for the nurses who provided that care.

The history of nursing, and of healthcare, demonstrates the intersections of race, economics, and society, particularly in the decades leading to the ratification of the 19th Amendment. The documents and photos of Mercy-Douglass Hospital and Training School for Nurses, the first African American training school in Philadelphia, allows African American women’s voices to enter into the dialogue of asserting their rights. 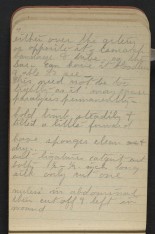 Mary Clymer’s notes show that while early nursing education programs were little more than apprenticeships, the presence of trained nurses with their emphasis on cleanliness, orderliness and close observation of patients successfully transformed hospitals into scientific institutions of caring.

Continuing to document women’s voices and assertion of rights with Chloe Cudsworth Littlefield whose work as a private duty nurse demonstrates the autonomy women created for themselves near the turn of the twentieth century.

For more information about the collections please visit our finding aids.

These collections were digitized for In Her Own Right: Women Asserting Their Civil Rights, 1820-1920.

Collections in this project: 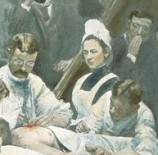 Mary V. Clymer diaries- Clymer left her notebooks at the Hospital of the University of Pennsylvania (HUP) Nurse’s residence when she graduated in 1889. The first volume contains Clymer’s lecture notes taken in class, the second contains much the same material, recopied. Comparing corresponding pages of the two volumes reveals how her course work was structured. The notes document also the variety of experiences which were part of her educational program including rotations in the hospital wards where she performed assigned duties under supervision of nursing faculty and nursing staff employed by the hospital.

Chloe Cudsworth Littlefield diaries- The diaries and training school lecture notes of Chloe Cudsworth Littlefield, an 1883 graduate of the Woman’s Hospital of Philadelphia Nurses’ Training School, allows us to document the personality and the practice of one practitioner. Not only do the items document a life but also provide a deeply layered perspective on 19th century nursing training and private duty practice that challenges historical assumptions.

Mercy Douglass Hospital School of Nursing student records pre-1920- This series of images from Frederick Douglass Hospital are pre-1920 student records that document the demographics of nursing students, including age, educational and employment background, address, and religion. The records also include letters from applicants, their references, performance evaluations, employment after graduation, the subjects required for training, and the qualities associated with a successful nurse.

Reflections on Suffrage: The 19th Amendment at 100