On the Brink: Pre-Outbreak, War Effort, and City Life

The 1918 Influenza Pandemic took the world by storm. Philadelphia was hard hit and ill prepared for any outbreak, let alone one of the worst pandemics ever recorded.

Credit: “Philadelphia.” From The Trustees of Phillips Academy. https://ark.digitalcommonwealth.org/ark:/50959/6395x800bInfluenza is a reoccurring viral illness that affects thousands of people each year, although, depending on the strain of the virus, the degree of severity varies. In the spring of 1918, an illness spread that acted much like the traditional influenza, but caused tremendous strain on the body and, ultimately, untimely deaths in young adults which more usually seen in very young children and older adults. The first wave of this virus made an appearance in parts of the US and Europe in the spring, but disappeared by early summer. Slowly in July and August, a second wave of this strain of influenza began to make its way through military training camps and nearby cities. By late August it had reached Boston and would soon spread throughout the United States, hitting Philadelphia in late September.

The first reported case of the flu in Philadelphia was recorded on September 11th at the Navy Yard although the public had no knowledge of this. As the virus began sweeping through the military, it slowly crept into the civilian population despite military officials’ best efforts to halt the spread of an illness in Massachusetts, first at the military’s Fort Devens and then in Boston. Men who had been exposed to the virus had already spent time in the city, and as navy hospital beds filled up, sick men were sent to local city hospitals. The disease spread rapidly. It quickly spread to Philadelphia, and exploded in that city after Liberty Bond parade on September 28th, designed to raise money for troops fighting in the First World War. This week we will focus on life in Philadelphia before the pandemic, to better understand how quickly it spread, why so little information was shared to the public, and the context in which nurses worked and society operated.

During the War, the city of Philadelphia was bursting at the seams. With a shipyard for the Navy, an influx of sailors in training, and workers flocking to its industrial mills, the population swelled to over 1.75 million people. This rapid population increase led to a lack of housing, severe overcrowding, and poor living conditions. Shared housing was common, as were families living in one room apartments, sharing beds and sleeping in shifts. The city had a municipal hospital- Philadelphia General Hospital- but had few other city provided social services and no orphanages.

Philadelphia private benevolent organizations attempted to fill in the gaps while also advocating for social welfare and reforms, with several organizations focused on providing services to the deserving in need. One organization was Starr Centre Association of Philadelphia, located in the South Central distract in a predominantly African-American neighborhood and European immigrants. Its mission was to improve working class conditions, particularly children with day care, a kitchen to serve low-priced, nutritious meals, and a free library, among other services. They also added a medical department to combat disease, particularly tuberculosis, and nursing service was provided by the Visiting Nurse Society of Philadelphia- VNSoP (today known as the Visiting Nurse Association of Greater Philadelphia).

The VNSOP was organized and managed by women from the city’s highest social ranks, the mission of the group was to provide nursing care in the home. Through donations from private individuals, churches, and other relief organizations, the VNSoP hired nurses to provide low cost home care. Additionally, it sought to educate the public, particularly low-income families, on the role of personal habits and hygiene to reduce illness from communicable diseases such as typhoid, diphtheria, and tuberculosis, and how to treat those diseases. It also expanded into maternity and infant care. As one early officer of the organization explained, nurses also undertook many activities which were not technically nursing but were considered important, such as “cleaning the sick room of lumber and unnecessary furniture, sweeping floors, and lighting fires.” During the early 1900s the VNSoP joined with physicians, city officials, and social workers in a movement to educate the public on health related topics. Because of its familiarity with neighborhood health and social conditions, the society was a valued member of this crusade. 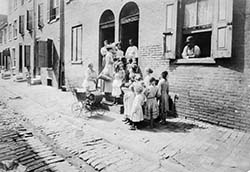 With 5 medical schools in the city and 31 hospitals, of which nearly every one had its own training school for nurses, Philadelphia had many medical personnel. But with the war, most of the hospital medical and nursing clinicians were sent overseas. The city sent 850 doctors and nurses to assist in the war effort. Daily nursing care remained constant in the hospitals though, because nearly all of the patient care was performed by nursing students, not professional nurses. There was also an uptick in women applying to be nurses due to the war (although many would leave the profession once the peace treaty was signed). Graduate nurses at hospitals served as head nurses and instructors to students. However, there were few doctors, and limited professional nurses to care for private patients or to provide public health services. The need for people to fill these roles was so critical that calls for volunteers, nurses, and women to enter nursing school went out as soon as the US entered the war, and nurses remained desperately sought when influenza struck the country.

During the war, warring nations, whether directly or indirectly, suppressed the reporting of news that would negatively affect public morale. In the US, the press was strongly advised to not report any news that could cause a mass panic. This included reporting on influenza and the cities which were affected by the disease, whether locally, nationally, or internationally. Spain, a neutral nation, had no suppression of the press and widely covered the influenza epidemic, leading to the erroneous name, the Spanish Influenza or Spanish Flu. The lack of official communication impacted the lack of early response to the illness and resistance to quarantine cities as well as spread fear throughout communities. With no information being shared, the public was left in the dark.

In Philadelphia, civic minded citizens and local politicians set aside differences to maintain peace during the war. As journalist Lincoln Steffens published in his exposé exposing municipal corruption in the U.S., Philadelphia was the worse city than any other place he investigated. Steffens wrote, “all our municipal governments are more or less bad,” but “Philadelphia is simply the most corrupt and the most contented.” Political machine, known as the Organization, and contractor bosses ran the city. They even forcing city workers to pay “voluntary contributions” to the Organization. Infrastructure projects, even street cleaning, were owned by bosses who financed city politicians, and influenced elections to maintain power and money. Favors to bosses and politicians for food baskets, jobs, or help with the police, were paid for in votes and/or the kickbacks garnished from city workers.

The dysfunction of the city’s government was highlighted in the fall of 1918, when an arrest warrant was issued for the mayor of the city, Thomas B. Smith, for his role in an election-day murder of a policeman, just prior to the influenza outbreak. Smith sought legal counsel in the midst of the crisis before becoming ill himself. Political appointee Dr. Wilmer Krusen, head of Department of Public Health and Charities, was not known for his experience in public health. Despite news from Europe and Boston about the influenza outbreak, Dr. Krusen did not stockpile supplies, medicines, or create a list of doctors/nurses for an emergency. He was reluctant to take influenza seriously for fear of causing a drop in public morale.

Everything came to a head in late September of 1918. The city was a tinderbox waiting to explode.