The Visiting Nurse Society of Philadelphia: Nurses in Action

Visiting nurses were on the front lines of the Influenza Pandemic. They faced illness, death, and risked their own lives and safety to care for others. 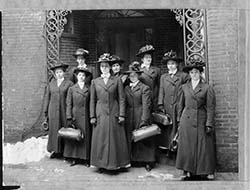 city’s Emergency Aid, a private relief organization, to provide assistance to citizens. They opened soup kitchens, procured loans of vehicles, and coordinated nurses’ visits throughout the city. The VNSoP’s mission was to provide nursing care in the home for low-income families, and were expanding into health education on contagious diseases as well as maternity and infant care. In September 1918 however, they took on the first cases of influenza in the city as the hospitals were quickly swamped with cases days before the Liberty Bond Parade. Influenza cases soon overwhelmed the organization and became their sole focus for weeks ahead.

In 1918, the VNSoP had a total of 134,761 visits, with 3,400 more patients than in 1917. The VNSoP had 4,050 cases during the influenza pandemic alone, with over 10,000 visits. Originally a staff of 54, the VNSoP increased their staff to 69 to care for the influx of patients. Of these nurses, 10 of them contracted influenza, and one died from the disease. There were also over fifty volunteers as aides and graduate nurses who donated time on weekends to assist the VNSoP.

Nurses were able to see far greater numbers with private citizens providing personal vehicles to drive nurses around the city. Philadelphia’s Automobile Club also donated its vehicles to the nurses. On average a nurse would see 20-30 cases in a day, and each case might be more than 1 patient. The highest number of patients one nurse saw in a day was 304. At the height of the outbreak the VNSoP had 200 new cases in a day, on top of previous cases. There were numerous calls they just couldn’t see. Sometimes they arrived too late to assist patients and found people dead. 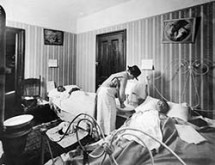 The nurses entered homes not knowing how many were ill, the conditions of the patients, or the conditions of the house. They bathed patients, boiled water, cooked food, and changed linens. They moved from house to house and patient to patient throughout the day. It was dangerous work- being on the frontlines, visiting strange homes, in the midst of a contagious disease. Even being out on the street was dangerous – one nurse was kidnapped from her taxi to provide care for someone.

From the VNSoP collection there are several recollections and accounts of what nurses witnessed during the pandemic. In one account, a nurse was leaving a case and received a call from across the street from a ten year old girl. She found that four out of seven in the family, including both parents, a baby, and two small children were critically ill with pneumonia.

“In a crib beside the mother’s bed was a six-week- old baby who had not been bathed for four days and was wet and cold. Though the father had influenza and was running a temperature of 103 degrees, (he) had to get out of bed from time to time to care for his wife and children, the only other attention they received being from the ten-year-old girl. The house was cold, as the family had no coal, and the three well children were shivering and hungry. The nurse gave care to the sick and bathed and fed the baby. She made a wood fire in the stove and prepared food for the other children. She then found a kind neighbor to continue to look after the children and make them comfortable.”

Following this family, the mother was hospitalized and later died, the father developed pneumonia and was sent to the hospital where he recovered but contracted tuberculosis (TB), and placement was arranged for the children while the father received TB treatment.

After the epidemic subsided, the VNSoP, along with Emergency Aid, declared there was a need for a post-flu survey of victims of influenza. The purpose of the survey and post flu care was to see what victims needed, what assistance societies could provide, and what ailments lingered. Families were left without providers/earners, large families now had only one parent or caregiver, many children were orphaned, and victims needed varying levels of assistance. During the holiday season, more people and children needed food and basic necessities than in previous years. Through the survey, the VNSoP brought follow up care to 800 influenza cases.

In addition to the survey, the VNSoP fully supported and implemented a new service. In July 1918, the VNSoP started a preliminary new service in Germantown. After the success of the new service implementation, they fully supported the new service - hourly nurse service. The main purpose was to allow people who required skilled nurses but didn’t need one full-time an opportunity to have a skilled nurse visit and pay a reduced rate. This allowed better quality care to be given to a broader range of patients, and not just wealthy families. It helped usher in private nurses to the public and influenced how public health nurses would develop in the years to come.