Keep Calm, Don’t Panic- In the Midst of the Flu

The city of Philadelphia was paralyzed by influenza. Public meetings were banned. Thousands were sick. Hundreds were dying. Nurses were overwhelmed with patients.

Philadelphia was ill-equipped for a pandemic. A significant percentage of its medical personnel- over 850- were overseas serving the war effort, leaving the city with minimal nurses and doctors in hospitals or private practice. City public health officials were not equipped for the outbreak. The city had few social services available and relied on the Progressive Era benevolent organizations and the women who ran them to fill in the gaps. Emergency Aid, the city’s largest private social relief society, took the lead when the influenza pandemic broke out. Together with 12 other organizations, including the Visiting Nurse Society of Philadelphia (VNSoP), these women leaders would take charge in the fight against the pandemic.

Supplies were bought, volunteer nurses and doctors organized into districts, and soup kitchens were opened to feed both the healthy and the sick. A twenty-four hour call center for citizens to receive information or referrals was opened at the Strawbridge and Clothier, a leading department store, at 10th and Filbert. Unlike other cities where the Red Cross led in relief efforts, here the Red Cross was folded into Emergency Aid. A call for nurses and volunteers went out to “Every healthy woman in the city,” and responses came from men and women across social classes as well as nuns. Society women cleaned, volunteered their automobiles to drive nurses to patients, and set up soup kitchens. Professional nurses came together with students and religious orders to administer care to the hundreds of influenza victims. The Red Cross in general, did not accept African American nurses into their service, but with thousands ill, black nurses were accepted depending on the city. For the military, it wasn’t until well into the pandemic and the demand for nurses had increased dramatically did they drop its refusal to enlist African American nurses. Even though these nurses cared for both black and white patients, they were assigned to segregated living quarters. The VNSoP also hired additional nurses and assistance, including African American nurses and aids. The shortage of nurses due to the war and the demand from influenza was deepened by nursing profession and government leaders’ failure to include African American nurses. 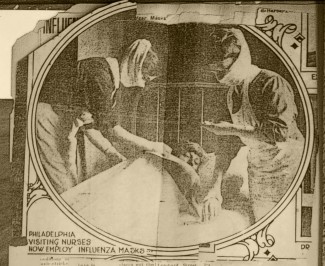 Thousands of patients reported the classic symptoms of influenza- fever, aches, sore throat, and headache. However, it was more severe than normal and soon some patients turned blue at the fingers, arms or face, had trouble breathing, and even bled from the mouth, nose or other orifices. More shocking was these were young men and women suffering from these terrible symptoms. Young adults in the prime of their life were contracting influenza, and secondary illnesses including pneumonia, at incredibly atypical rates, and even worse, they were dying. Young men and women- strong, fit, hearty- were turning blue fighting the virus. Nurses noticed that once a patient turned blue from cyanosis, they were unlikely to recover and death would soon follow. Doctors could do little to help. There was no cure or medical treatments to make patients better. Nurses could help. Nursing care was critical in the day-to-day battle against influenza. Nurses were overwhelmed with numbers of patients, either at the hospital, at home, or in the field, yet they continued to do their job in the face of overwhelming numbers.

There weren’t enough hands to help each patient- some died within 12 hours before being seen by a nurse or a doctor. Fresh laundry, water, and fluids and food were critical to combating the flu, but with so many patients it was difficult to obtain supplies. Medicines to ease the pain ran out. Clean linens and soups were used as quickly as they were made. Volunteers were brought in to cook food and wash laundry at hospitals and at the VNSoP.

The VNSoP, which generally sent nursing care for maternity or infants, took on some of the earliest cases of the flu and were overwhelmed before the Liberty Bond Parade. By the end of first week of October, these nurses would see on average 20-30 cases in a day, with the highest at 40 cases in a single day. And each case might be more than one patient. Nurses often cared for most of one family in a single call. Some arrived too late to provide care and found bodies and orphans.

As one nurse recalled”… In a crib beside the mother’s bed was a six-week- old baby who had not been bathed for four days and was wet and cold. Though the father … running a temperature of 103 degrees, had to get out of bed … to care for his wife and children… . The family had no coal, and the three well children were shivering and hungry. The nurse gave care to the sick and bathed and fed the baby. She made a wood fire in the stove and prepared food for the other children. She then found a kind neighbor to continue to look after the children.”

Emergency Hospital #1 opened on October 3rd and was filled to capacity within one day. 12 more temporary hospitals would open up in churches, synagogues, and schools- anywhere with available space. The previous year, the University of Pennsylvania had taken over Medico-Chirurgical Hospital, and because of the pandemic, reopened it with 200 beds under the direction of Dr. George Meeker, dean of the Graduate School of Medicine, and third and fourth year medical students provided nursing care for patients

Dr. Wilmer Krusen, head of Philadelphia’s Department of Health, remarked, “If you would ask me the three things Philadelphia most needs to conquer the epidemic, […] I would tell you ‘Nurses, more nurses, and yet more nurses.’ Doctors we have enough of. Supplies are plentiful, buildings are offered us everywhere. We have many beds that might be opened to patients. But without enough nurses to tend those we already have, we are helpless.”

What flu patients needed was what was often too easily dismissed as basic nursing care. In all settings, nurses were changing linens, bathing patients, checking temperatures and respiration rates, and feeding soup and other liquid nourishments. They used what they could to help patients’ suffering using ice packs and aspirin to reduce fever, and mustard plasters and cough syrups to alleviate lung congestion. Visiting nurses also taught healthy family members basic hygienic practices to avoid contracting the flu themselves: covering coughs and spitting into handkerchiefs, boiling soiled linens, and opening windows for fresh air.

Although some classes, races, and ethnic groups were hit harder than others, none were left untouched by the disease. The influenza virus affected everyone, and those who did not fall sick with the flu knew someone who was sick or had died from the outbreak.

Influenza Rates and Bodies Piling Up

Within 72 hours of the Liberty Bond Parade, every one of the city’s 31 hospitals were filled. October 1st reported 117 dead. The city banned all public meetings, including schools, theaters, and church meetings, on October 3rd, but it was too late to be effective. By October 4th it was estimated that 75,000 people were ill. The 5th recorded 254 people dead. The 6th, another 289 died. October 7th and 8th each recorded over 300 patients who died from influenza. The worst was yet to come. Soon the daily death rate just from influenza would match and exceed the weekly death rate by all other causes (485). Most people who contracted the virus would recover. But in this pandemic, the flu spread faster than it traditionally would and impacted young adults at an atypical rate. Rather than older adults and young children dying in large numbers, young and healthy adults were succumbing to the disease. The number of adults aged 19-34 who died exceeded all other population groups combined.

The city morgue was designed to hold 36 bodies. It was quickly overrun, with nearly 200 bodies crammed into every available space and yet it still was not enough. Exacerbating the overload, besides the rapid influx of the dead, was the lack of available undertakers and grave diggers. Mortuaries quickly filled and coffins soon ran out. It wasn’t uncommon in the early days of the flu for people to steal coffins as supplies ran out. Bodies, with and without coffins, piled up, and embalmers and embalming materials were in short supply. Grave diggers weren’t available, either sick with the flu or overwhelmed by the sheer number of graves to be dug. For some families, it was easier for them to dig a grave themselves than wait for someone else.

During the height of the flu the city established 5 additional temporary morgues, but even that wasn’t enough. Bodies piled up in hospitals, on porches, on the streets, and in the home. Rooms, if there were any to spare, were sectioned off when family members couldn’t arrange for or find someone to take care of the body. Without embalming, the bodies started to decay; bodies oozed and blood would flow out. The smell was everywhere. Death was everywhere.

It took Dr. Krusen until after October 7th to take action. Temporary morgues were established. Coffins were made cheaply in the steel factories. Policeman were tasked with going house to house to clear the bodies. Priests were asked to assist with clearing the bodies. They even used horses and carts to carry out collecting bodies (much like the Black Plague of the Middle Ages). Priests, along with hired men, dug graves - often mass graves – with construction equipment to clear the morgues and hospitals of bodies.

Nurses put themselves on the front lines of combating this disease. They knew how quickly traditional flu could spread and now saw the new symptoms and the higher death rate, and they still did their duties. Even when they saw their fellow nurses infected by influenza, they remained professionals day and night. And the worst week was yet to come.