Portrait of the Nurse as a Young Woman 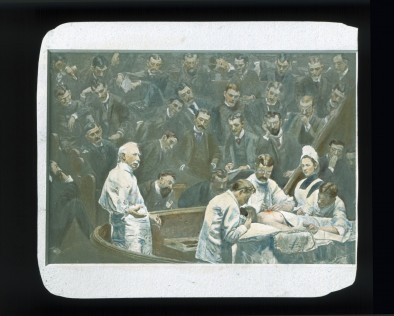 The Agnew Clinic (1889) has delighted and disturbed viewers since it was commissioned by the Penn Medical Class of 1889 to honor their retiring professor Dr. D. Hayes Agnew.

But the painting isn’t just an artistic masterpiece—it depicts important medical advances as well. One of the medical trends evident in the painting is the increasing reliance on assistants during surgery. This was true at Penn in the 19th century, as student nurses were expected to work at the hospital while they were receiving training. The nurse assisting in the painting is Mary V. Clymer. 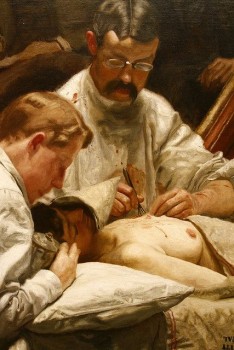 Close up of The Agnew Clinic

Surgeons performing a mastectomy on an unconscious woman.

Realism: an artistic movement that began in France in the 1850s aiming to reject sentimentality and artificial artistic conventions, in an attempt to present the “truth” of the subject, however ugly or sordid. The Agnew Clinic exemplifies this artistic school.

Reactions to The Agnew Clinic when it was unveiled were mixed, to say the least, and have remained so ever since.

Eakins’ contemporaries in the art world were uncomfortable with the depiction of a naked breast, and considered the bloodiness of the painting gratuitous. It was rejected for exhibition in 1891 at the Pennsylvania Academy of Fine Arts and would not be publicly shown until the 1893 World’s Columbian Exhibition.

While critics are now more comfortable with the nudity and blood in the painting, they still struggle with how to interpret Clymer as a lone female figure. What is her relationship to the surgeons and observers? To the woman being operated on? Outranked by both the male doctor and medical students, she is nevertheless a professional, unlike the female patient. Judith Fryer (1991) asks,

“With whom does she identify—the doctors or the unconscious and mutilated woman? (‘The Female Body’, 237)”

There is some evidence to support this theory, especially as The Agnew Clinic is a composite of several surgical scenes. While the depiction is realistic, it’s also highly narrative—the expressions of several figures tell the viewer a story about how those “characters” are responding to watching the mastectomy being performed. 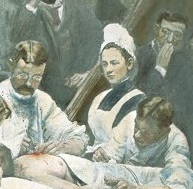 Close up of Mary V. Clymer in The Agnew Clinic

However inscrutable her expression in the painting, Clymer is not simply an enigmatic character. She was a real person whose diaries give us a strong sense of her beliefs and emotional life. This can shape how we interpret the painting.

“We must always be dignified & grave [when assisting a surgery] never forgetting that all we are trying to do is for the good of the patient” (Clymer, v.2, p.52).

Keeping Clymer’s own words above in mind, her lack of reaction to the gore of the surgery being performed may be both an attempt to discharge what she feels is her moral responsibility not to upset the observers of the surgery by broadcasting fear and simultaneously identify herself with the medical class and the surgeon by establishing herself as a professional.

However one interprets The Agnew Clinic, it is clear that the painting and Eakins’ compositional approach cannot be understood apart from the experience of being a woman adjacent to the medical profession in the late 1900s. If Clymer’s presence in the painting is symbolic, that is connected to how Dr. D. Hayes Agnew, Eakins, and the male medical class of 1889 would have expected the real Clymer to act, and how they interpreted her when she did. As you read her diaries, consider the following questions: Did the doctors and medical students see Clymer and other nurses they interacted with as real human women, or symbols? And if they saw the nurses as symbols, like Eakins arguably did, were they actually seeing them at all?

Comments or questions? Email the Barbara Bates Center at nhistory@nursing.upenn.edu.

At the University of Pennsylvania:

At the Philadelphia Museum of Art: