Midwifery is about empowerment. Jatolloa Davis, a Certified Nurse Midwife with Thomas Jefferson University Hospital, provides midwifery services at six different sites around Philadelphia—and for her, the best part of her job is “bearing witness to folks gaining or finding their power.”

“I’m also there for some of the most vulnerable moment,” she adds. “I’m there when someone hears their baby’s heartbeat for the first time, or when they don’t hear the heartbeat, and we find out the baby is no more. I’m there when someone makes an informed decision about their reproductive life and journey. I get to be there in the moment before a birth when the birthing person has nothing left, and then immediately after—and they look at you and say, ‘I did it!’ I get to let people show up as they are.”

As they are is an important distinction—Jatolloa is dedicated to connecting with her patients in a way that is most effective for them. As a midwife, Jatolloa notes that midwives have the resources to bridge gaps in health care and “provide space for people to show up as full humans. At Jefferson, formerly known as Hahnemann Midwives, we take care of a majority of health center patients. These folks are mostly black and brown, uninsured or underinsured. Black and brown women, in particular, are often overlooked and underserved. Those are the folks who deserve to have a provider that looks like them. They deserve to have care where systems are connected.” 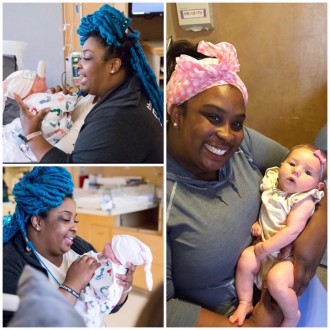 Jatolloa is part of a midwifery revolution that is working to return power to people who have traditionally been disenfranchised by the health care system. Racist and biased health care and providers, and hospital systems concerned only with the bottom line have resulted in critical disparities in maternal mortality outcomes for black and indigenous women, particularly. The American College of Nurse-Midwives released its first position statement on racism and racial bias in May 2018, committing itself to eliminating racism and racial bias in the midwifery profession and race-based disparities in reproductive health care.

“If folks do not know the care they deserve then they won’t know to expect it,” Jatolloa notes. “Depending on which site I’m at, I might be seeing clients for return prenatal visits or new OB visits, or—if I’m at the hospital—I might be guiding residents in what normal labor and birth look like, as well as supporting the birthing person and their chosen family. We (midwives) assist in postpartum rounds and triage—we are super team oriented while on labor and delivery, and ensuring that everyone adjusts to the ideas that everyone deserves a midwife and that most people can benefit from a midwife being a part of their care team.” Making high quality care an expectation for black and brown people is the goal.

In addition to Jatolloa’s work with birthing people, she is also drawn to addressing racism and black maternal health through community work. “A client asked me to teach a health class about midwifery, health disparities in birth, and birth options, and it grew into community work with the main goal of education. In addition to lecturing at high schools and community centers, mostly in Pittsburgh, I also created a summer program that mentored high school students with regard to midwifery and women’s health in the hopes that they would choose midwifery as a profession to increase the number of providers of color. More recently, I helped to create a program that addresses racism and bias in health care providers.”

Her work with health care providers is crucial for forging a more just health care environment. “I’m excited to be involved with medical student/resident education. We are able to help shape the physicians who will care for pregnant folks in the future—and we are shaping what midwifery will look like in a major health care system like Jefferson.”

Random fact: Jatolloa loves singing camp songs at the top of her lungs, and has been a camp counselor every summer since she was 15.