12,000 wigs. That’s how many wigs have been donated to Penn Nursing alum and former Board of Overseers member Sandy Samberg’s The Wig Exchange initiative after a single article about the effort appeared in her local New York newspaper. Sandy says, “We received almost 100 phone calls within 48 hours of the article being published, and then the wigs started arriving.”

The Wig Exchange is part of the non-profit SOUL RYEDERS that Sandy co-founded in 2007 (she is currently the organization’s Executive Director). SOUL RYEDERS started out with Sandy participating in the 39 mile Avon Walk for Breast Cancer and having an idea to grow a walking team (initially comprised of women from her Rye, NY town) to help raise money for cancer.  The effort expanded into a non-profit organization that provides a wide range of resources and support for those of all ages affected by all types of cancer. The Wig Exchange developed in much the same way: out of need and with the support of Sandy’s community.

“I received several inquiries from women who needed wigs during chemotherapy, but they either couldn’t afford them or didn’t know where to start when it came to looking for a wig,” Sandy says. “Around the same time, a woman who I helped during her cancer journey had a gorgeous $3,000 wig that she no longer needed. The two of us brainstormed with her husband, who has professional experience with exchanges, and came up with the idea for what is now called The Wig Exchange.”

People who no longer need their gently used or new wigs donate them to The Wig Exchange. Sandy and her colleagues at SOUL RYEDERS have the wigs professionally cleaned and reconditioned as needed, then loan them out to cancer patients. “But 12,000 wigs are far more than we need or can afford to have professionally cleaned,” Sandy says. “That’s how Wigs Without Borders, an extension of The Wig Exchange initiative, was born. In 2014 I was contacted by a breast surgeon in Botswana, and she explained that in her country people think cancer is contagious, that you have evil spirits, and if you’re lucky enough to receive chemotherapy, as soon as you lose your hair, the cat is out of the bag and you are shunned by your tribe—so a wig has the potential to literally save a woman’s life.” 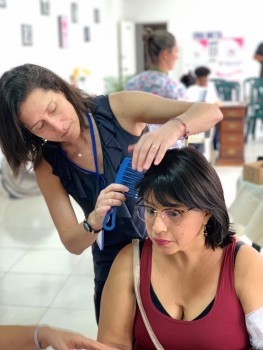 Sandy and her colleagues shipped wigs to the breast surgeon, and the surgeon sent photographs of her patients wearing them. “We thought that if women in Botswana need them, there must be women all over the world who can benefit. Since then we have provided wigs to women in over a dozen low-resource countries around the world. Two of us from SOUL RYEDERS were invited to represent Wigs Without Borders on a medical mission to Cali, Colombia last year. It was an incredibly powerful experience.”

Cancer support, wigs, and entrepreneurship were not what Sandy envisioned for herself as young girl—but she knew she wanted to be a nurse since she was a teenager. “I was 16 years old when I was involved in a traumatic accident. My sister’s injuries were significant, and she spent the summer as a patient in the hospital.” Sandy was no stranger to the medical community—her father was a pediatrician, and she started helping out in his office when she was 11 years old. As much as she liked what he did at the office, she was impressed by the role of the nurses in her sister’s care and the impact they had on her recovery.

“My sister formed a unique bond with her nurses,” Sandy says. “I remember talking to my dad about how I felt a deeper connection to the nurses and their role in the health care system. He told me about nurse practitioners—NPs were scarce in the 1980s—and suggested I shadow one at work. As soon I saw one in action, I was sold!”

Prior to Sandy’s work with SOUL RYEDERS, she worked as a Pediatric Nurse Practitioner in New York City and co-founded BABY-C, Inc., a company that produced starter kits for new parents.

Sandy and her husband Joe are generous supporters of Penn Nursing, including funding student study abroad activities and the School’s Story Slam series.

Random fact: When Sandy was six years old she was riding double with her babysitter on a bike—and ended up in the ER after flipping over the bike. “Against the advice of so many,” she says, “I never got on a bike again—until I became an empty nester. My husband purchased a cruiser for me last year, and I rekindled my love for biking.”