gretchen Lawhon is a Clinical Nurse Scientist with Newborn special care associates, pc at Abington-Jefferson Health’s Division of Neonatology and co-founder of the Newborn Individualized Developmental Care and Assessment Program (NIDCAP), as well as a NIDCAP Master Trainer. Her entire career in health and healthcare has revolved around perinatal care—and it all stems from a desire to forge her own path. 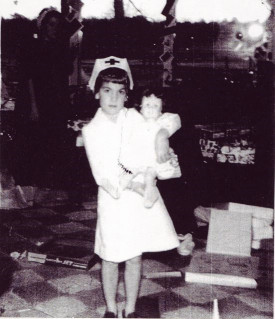 gretchen Lawhon at 7, even then on the road to being a nurse.

No one else in gretchen’s large family was a nurse, nor did anyone work in healthcare. “I had read a lot of stories about nurses,” she says, “and it seemed like something that could be all mine. My earliest memories of were of wanting to be a nurse. As a seven-year-old, all I wanted for Christmas was a nurse’s uniform—and my mother came through: she made me a fantastic uniform that I treasured.”

A few years later when gretchen was nine, her mother assigned her to look after one of her younger sisters—gretchen is one of thirteen children. “The opportunity to care for my sister and my other younger siblings reinforced my desire to be a nurse and gave me a sense of satisfaction that comes with caring for someone.”

Caring for someone has been the focus of gretchen’s career. Her first nursing position was in a small pediatric facility in Boston. She says, “I found myself caring for very complex severely damaged children from a variety of accidents and illnesses. As I facilitated parents in learning how to better understand their son or daughter with changed and limited abilities and how to care for them at home, I was impressed with the power of parenting and nurturing and its effect on a child’s outcome and prognosis.”

The defining event that pushed gretchen more definitely toward work in the newborn field was caring for an infant with arthrogryposis. “I realized that if I wanted to have the greatest effect on parenting then I should work with families in their transition to parenthood.”

The move from pediatrics to perinatal care was marked by gretchen’s advanced degree from Penn Nursing, after which she landed in the Boston Hospital for Women as an “over-educated inexperienced NICU nurse” with a promise that she would become their first neonatal clinical nurse specialist. While gaining experience as a neonatal nurse, she began a parent support group and became certified in the Assessment of Preterm Infant Behavior (APIB)—this experience became the anchor of her clinical practice: it is how she connected to pioneering infant and child neuropsychologist Dr. Heidelise Als.

“Dr. Als wanted to do clinical research at what had become the Brigham and Women’s Hospital, and I was the most qualified and likely nurse collaborator,” gretchen says. “NIDCAP grew from the seminal clinical research we did on individualized developmentally supportive care. This was, and continues to be, a very academic research based formal training program, which became incorporated as an international nonprofit organization in 2000 as the NIDCAP Federation International (NFI). There are currently 24 NIDCAP training centers around the world. As co-founder of NIDCAP, I was also a founding member of the NFI Board of Directors, President from 2012 through 2016, and just completed 18 years as a board member.”

gretchen has maintained a varied career as a researcher, educator, and clinical nurse throughout the years, but there has been a constant: her work as a NIDCAP Master Trainer in the United States, Israel, and Japan. “I have had the opportunity and privilege to train hundreds of individuals in the NIDCAP model and to consult with nearly a hundred different Newborn Intensive Care Units,” she says. “It has been my mission through research, education, and consultation to influence the manner in which infants and families are cared for in any NICU. As a clinical nurse scientist, I live the mission on a daily basis, modeling the philosophy of individualized caring and the importance of relationships with infants, families, and staff.”

As it turns out, gretchen would not be the only nurse in the family—nor even the first nurse in the family. Her eldest sister returned from the novitiate and became a nurse before gretchen was old enough to attend college. And after gretchen graduated from Penn Nursing’s MSN program, two of her sisters followed in her footsteps (Elizabeth L. Torresson, GNu’84 and Captain Rebecca A. Lawhon, GNu’95); gretchen went on to earn a PhD in Nursing Science from the University of Washington. An additional two sisters became professional nurses as well, one doing a double major with criminal justice. Her family continues to be a source of great strength to her, working together to care for her parents as they aged (they continue to care for their mother) and standing committed to one another.

Random fact: In 2018 gretchen and her husband bought a home with their son and his wife who have a 2 ½ year old son. “We have embraced multi-generational living with a planned and equivalent ownership of a home,” she says. “As ‘grammie g,’ I have the joy of seeing my grandson nearly every day, and because I work fulltime four days each week, I am able to have my Fridays with him. Currently, we are doing swim lessons.”