Launching Leaders in the Latino Community 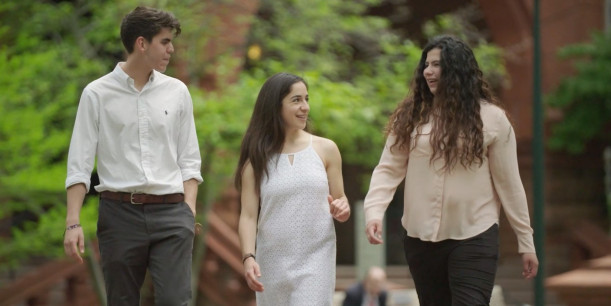 One year ago, three Penn seniors wrote a 1,000-word description of their plan to create an after-school program for Latino teenagers in South Philadelphia, the centerpiece of their application for the President’s Engagement Prize.

Winning that prize, and the funding and support that comes with it, was life-changing for the trio of students, Yaneli Arizmendi, Alexa Salas, and Camilo Toro, who graduated from Penn in May.

Now they are changing lives through their thriving bilingual and bicultural program, Lanzando Líderes (Launching Leaders), which has enrolled 24 high school students.

The project is in partnership with the nonprofit Puentes de Salud (Bridges to Health), where they had volunteered as Penn students.

The social service agency already had a robust education program for elementary and middle school students, but not for high schoolers. Now Líderes has a classroom in the new Puentes health and wellness center at 1700 South St.

“The experience has been so rewarding. We’ve formed bonds and relationships, not just with the students, but also with their families,” Arizmendi says. “There is so much need.”

Created by Penn President Amy Gutmann, Penn’s Engagement Prize includes a $100,000 award for project development and a $50,000 living stipend to each team member. 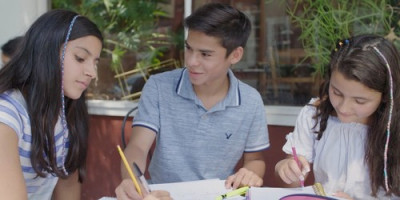 The Lanzando Líderes program has enrolled 24 Latino high-school students in partnership with the non-profit Puentes de Salud in South Philadelphia.The Lanzando Líderes team got to work in July to decide the project details. The heart of the program, they decided, is development of leadership qualities, incorporating academic support, and other opportunities to help the teens define and achieve their goals.

“We want to teach students how to be leaders in their own lives and in their communities,” says Toro.

The biggest hurdle was creating the curriculum, which they decided would be based on three E’s—enrichment, engagement, and education.

None of the three had studied education at Penn. Salas, from Phoenix, has a degree in urban studies and may go to law school. Arizmendi, from Chicago, has a degree in nursing and plans to be a nurse practitioner. Toro, from Lexington, Mass., majored in neuroscience, and wants to become a physician.

“There was a huge learning curve for us,” Salas says. 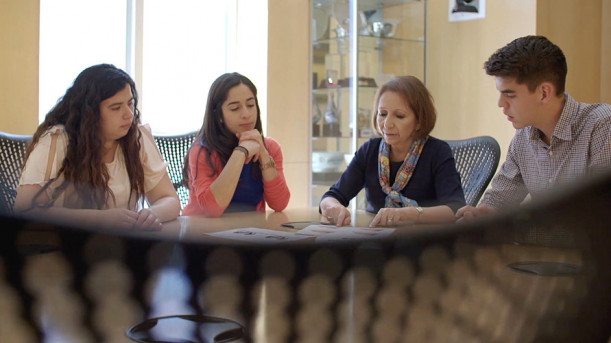 Dean Antonia Villarruel of the School of Nursing is the mentor for the three Penn graduates. All four grew up bicultural and bilingual.

For help they turned to their mentor and advisor, Antonia Villarruel, the Margaret Bond Simon Dean of Nursing, who has long experience working with Latino teens and parents. Villarruel helped them focus their ideas, and made practical recommendations on the details of how to structure and deliver the content.

“We were very ambitions, but we decided to start small and learn a lot, and then grow bigger,” Arizmendi says. “It was a wise decision, to take the time to listen and to really understand what is needed first.”

Villaruel and the three graduates have much in common with each other and their Líderes students, as children of immigrant parents who grew up bilingual and bicultural in the United States. The project is “our collective way of being able to give back to the community,” Villarruel says.

When the school year began, the Líderes team started to recruit students through fliers, social media, radio, and word of mouth. The application was simple, but required a personal interview, along with their parents, to describe their goals and interest and commitment to the program.

“Once we chose the 24 students, it became much more about them,” Toro says. “It was about the individuals, each with a different story and interest and personality and attitude.”

The Penn team also recruited college volunteers, called Tutor-Mentor Interns. Most of the 19 tutors this year are students or alumni from Penn, but a few are from Temple University. They are also children of immigrants, most bilingual, many the first in their families to attend college.

“They have successfully navigated the process of high school and college, and have wisdom and experience,” Salas says. “We are inspired by them, too.”

The Penn team members collaborate on all aspects of the program, and are unanimous on the decisions. However, each has carved out a leadership role based on their strengths: Arizmendi works with the parents, Salas with the volunteers, Toro with research and evaluation.

“Our job is basically doing something, reflecting on it, learning from it, and improving on it,” Toro says. “That’s every day, every time, from where markers are placed for a workshop to what we are planning two years from now.”

The after-school program meets twice a week, on Tuesdays and Thursdays, for three hours. The curriculum includes six components:

The students toured Penn’s campus in October and heard from admissions counselors. They also met with a group of first-generation students through La Casa Latina.

“For many of our students, this was their first time on a college campus. It’s powerful to hear from students who look and sound like you, and who have had some of the same experiences,” Salas says. “It really resonated with them.” 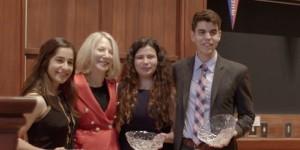 Lanzando Líderes was one of three chosen to receive a President's Engagement Prize in 2017.The support from the Penn community has been invaluable, the team says, as well as the opportunity to leverage that support to help others.

“It’s incredible that we have those kinds of resources available to us,” Toro says. “Not only the financial support from the prize, but also everything that comes with being part of Penn, having everyone at University supporting what we are doing.”

The team hopes to expand the Líderes program to include more students, as there is a growing waiting list. The ultimate goal is to make the program sustainable, even after the three founders move on to pursue their individual career goals.

“I think the Engagement Prize is an amazing opportunity for people who want to make substantial change in their communities. It’s a perfect way to get that vision to reality,” Arizmendi says. “And it’s a really thought-provoking way to approach how you want to live your life, a life of service, a life of good, and translating that into action.”

The application deadline for the 2018 President’s Engagement Prizes and President’s Innovation Prize is Friday, Jan. 19, 2018.