Accreditation Announcement for the Nurse-Midwifery Program>>

On November 17-18, the Student Nurses at Penn (SNAP) sent a total of twenty-nine students, one faculty member, and one admissions representative to this year’s 64th Annual Student Nurses’ Association of Pennsylvania Convention held at the Lancaster, PA Marriot Conference Center. 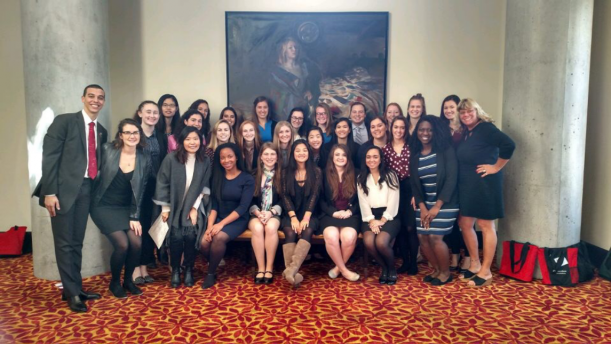 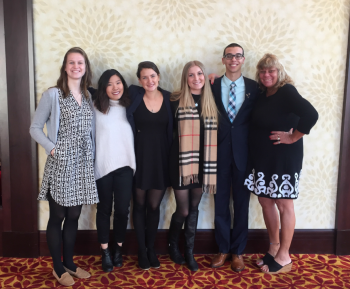 Two resolutions were written and passed during this year’s resolution hearing in the House of Delegates. The first, “In Support of the Education and Awareness of the Health Benefits of Maternity Leave for Mothers and Children,” was authored by Cecilia Wang, Skylar Stowell, Caroline Bourneuf, Rachel Pak, and Lauren Valdes. The second, “In Support of Establishing a State-Wide Recommendation Limiting Processed Meat Consumption,” was authored by Nali Asamoah, Kelsey Gross, and Michelle Nigro. Kelsey responded to questions, successfully defending their resolution’s evidence-based recommendations. Both resolutions were supported by our university chapter’s Legislative Coordinator, Kara Keyes. 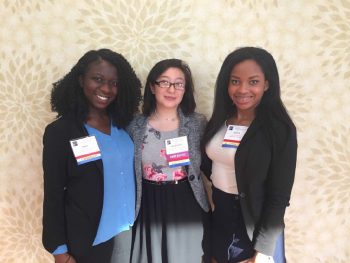 Nali, Stephanie, and Anita, after presenting their speeches and campaigning to delegates.At the Annual Awards Banquet, we were thrilled to celebrate the accomplishments of our chapter and individual members who received scholarships and awards. The University of Pennsylvania’s local SNAP chapter received the Community Health Award, the Outstanding Website Award, and a Gold Achievement Award for Membership Recruitment and Retention. The First Year Scholarships were awarded to Stephanie Tran Rojas and Dariely Duran, and the Upperclassman Scholarships were awarded to Kelsey Gross and Crystal Lu. The Jamie Thiel Miller Memorial Legislative Award was presented to Cecilia Wang.

Our chapter’s President, Crystal Lu, was also awarded the Rena M. Lawrence Award for her exceptional leadership and dedication. Clare Whitney, our chapter’s Vice President, was awarded the Passion for Nursing Education award. Finally, special recognition was given to Marcus Henderson, for his years of service to the Student Nurses’ Association of Pennsylvania. Of the fifteen scholarships and awards available to the entire state, ten were awarded to the University of Pennsylvania School of Nursing’s students and chapter.