The Narrative Arc in Health Care

Storytelling is changing the face of nursing and empowering providers and patients. And Penn Nursing has carved out a particularly strong position. Here we explore the various mediums, how the community is engaging, and why it’s more important now than ever before.

In the last four years, Leary MSN MPH RN has helped launch multiple programs that allow nurses to share their experiences from the bedside and on the front line, from hospital corridors and in the world’s most remote corners. Telling a true tale benefits both speaker and listener, builds bonds, and can change minds.

Storytelling has become even more important in the last few years, as misinformation about COVID-19 and its vaccines, among other issues, has caused immeasurable damage. Nurses, through storytelling, can counter the false narratives.

“My understanding of being human is we’re always seeking stories,” Bardhan says. “We’re trying to make sense of the world around us.”

To people who claim they have no stories to share, Bardhan pushes back: “Trust me. You had a very bad day and you had a very good day in your life and there’s a reason you’re here in this life right now, not necessarily on a cosmic level, but you can tell me how you ended up in this room.”

Bardhan and Leary work closely on projects including the Penn Nursing StorySLAM, a story telling competition now in its fourth year. Bardhan said he has been part of many storytelling projects but none have been as impactful as a healthcare consumer and a family member.

“Not every project that I get to do has a deep impact on how I live in the world but the Penn Nursing StorySLAM has been tremendously important to my understanding of nurses and the way nurses show up in our society,” Bardhan says. “This series has benefitted me positively as a storyteller, as a listener, as an instructor, as well as a patient and family member. Not every project touches all those levels for me.” 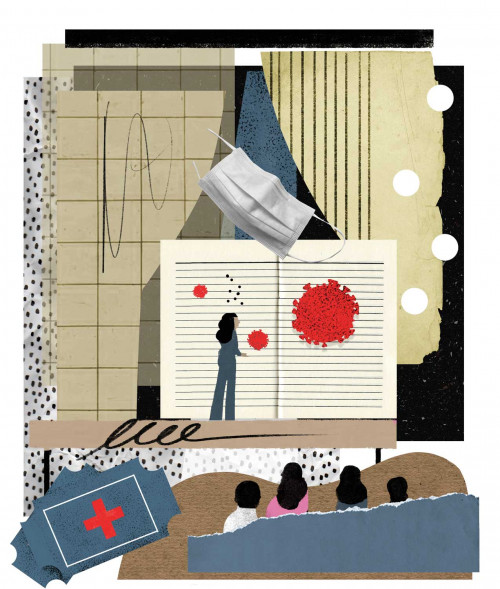 About five years ago, Leary took part in a StorySLAM, a live competition in which participants tell a true, short story without notes and are then judged based on content and performance. Leary says the experience confirmed that she prefers the spoken word to the written one–and that it has great value.

“I knew it was a powerful medium to use to get stories out to the general public,” she says. “A free and open public event allows you to share your work and ideas to different audiences and maybe the people who will need it most.”

Corman described how, in 2010 as a U.S. Air Force officer stationed in Afghanistan, she jumped to respond to an incoming plane carrying injured soldiers. On board she saw her first casualty of war, a soldier named Tim from New Zealand. Was he married? Did he have children? Did his family know he’d been killed? “I willed time to stop for [his family] to have one more day with Tim before they were overtaken with this immeasurable void that would forever change their life, their world, and they would live with every day,” she told the audience in a choked voice.

Then “Suddenly, I’m Lt. Corman again.” She described smiling at another injured soldier, rubbing his face, taking his hand, and saying, “Welcome to Bagram. You’re safe. We’re going to take great care of you.” Later, she held the man as he sobbed.

She never expected to see the man again but, seven years later, she found herself sitting across from him in a New York outdoor café. He told her, “You were the only person I remember. You gave me the human touch and care I so desperately needed.”

The Nursing StorySLAM was an immediate success, drawing a standing room
only crowd the next year. The 2021 Slam moved online, but returned in February 2022 as a hybrid, and is slated for every- other-year going forward.

Hope Atkins-Durante talked about her first weekend working in the COVID-19
ward at Lancaster General Hospital. One patient was clearly taking his last breaths and Atkins-Durante spent time at his bedside, holding his hand, and encouraging him to walk towards the light. She later learned he was an elderly ward of the state. That meant there was no obituary to commemorate his life, no funeral with mourners who loved him.

“This person was so worthy of being remembered and he was dying of Covid and nobody knew,” Atkins-Durante says. “I didn’t know this man, but I’ll remember him. Everyone
I share this story with will remember him.”

“We hear constantly how the stories have affected people. They’re being used in some classroom settings now,” she says. “Others are feeling the impact of what we’ve done.” 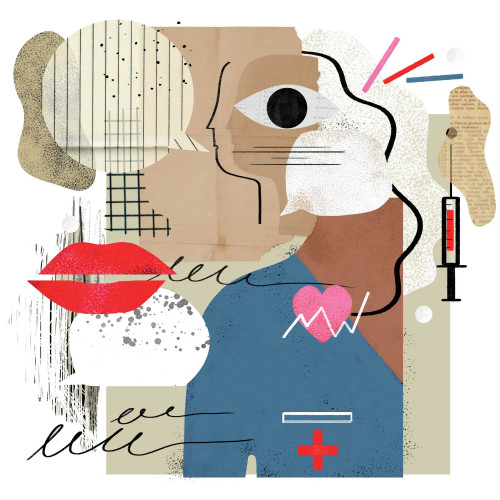 “Nursing has lived in the shadow of the patriarchy for its entire existence,” says DiDonato, a nurse anesthetist with more than 25 years on the job. “People think we walk around and wait for doctors to tell us what to do. We have our own practice, our own protocols.”

How to educate the masses? How about a podcast? DiDonato took the idea to Leary, who recognized the idea’s value but also realized how stretched she was. Would DiDonato co-host?

Amplify Nursing, hosted by DiDonato and Leary, launched about three years ago and recently wrapped its fifth season, which runs from September to December, and then again from late January/early February to May. New shows are released every other week.

Topics vary, says DiDonato, ticking off a few favorites: “The conversation about people of color in nursing was eye-opening and incredibly humbling … the importance of understanding the history of our profession and how we got here … there’s cool stuff tech people are doing, walking away from traditional nursing roles … I never realized nurses did investigations into criminal acts.”

While most episodes get about 500 listens, some have gone mini-viral, drawing thousands of listeners. Among its most popular episodes: A season one show centered on Ann Burgess, who spent decades profiling criminals with the FBI and who inspired a character in TV’s Mindhunter and a Season four episode featuring Penn Nursing Dean Antonia Villarruel.

“I’m constantly amazed, honestly, by everyone I talk to and their stories, how they got into nursing and how they use nursing to do what they’re doing now,” DiDonato says. “It’s so creative.”

A nurse of Chinese descent talks about the difficulties of caring for patients who deny the virus
or blame her and tell her to go back where she came from. (“I’m from Texas,” she says.) A front office worker is frustrated as she calls multiple locations and fails to find protective gear for hospital staff, prompting her to wonder aloud, “Do you feel like you’re allowed to be tired?” The patient transport employee marvels at the new work relationships she’s developed with the other women because of the pandemic, describing it this way: “Before we were all kept in our special areas of the sand box … Like silos … now it’s all hands on-deck.”

The play shows the powerful bonds that form between those living through a shared trauma and how those connections make the bad things more bearable. It is one of two new works based on two workshops facilitated by Elevate Theatre Company’s Christina Eskridge. During those workshops, employees from throughout Penn’s hospital system shared stories while two playwrights, Brake-Silla and Ang Bey, listened in.

“We needed to hear their stories and lift their voices,” Eskridge says. “This was a way to not only chronicle the moment but also to vent. … It helps people have catharsis sharing their stories.”

The workshops were not straight interviews; at one point, participants were asked to describe their typical work day and to show, with gestures, their job in 2022 versus before the pandemic. One nurse held out a hand, palm up, arm extended–a standard “helping hand” move–to indicate her job before COVID-19. She made the same gesture to show the after, but she moved it up and down to show the franticness she felt.

Bey’s play, titled Soft Landing, centers on a COVID-19 patient, his nurse, and his estranged
son. But it begins with the nurse describing the premature birth of her daughter and how the experience erased her grim outlook and inspired her to become a nurse.

“The existential crisis that I’d had about the world and its people was absolutely debunked. In the NICU… My partner and I were surrounded by strangers eager to save the life of a person they’d never even met … I’ve never felt so much compassion from strangers, then and now it felt like a dream. I just hope that our daughter will grow up to experience that kind of love sooner rather than later. I hope every child does. I wish every child did.”

Both plays had their virtual debuts on March 31. After the performances, Penn Nursing’s Leary facilitated a talk-back which included the two playwrights. Bey shared that during the workshops, participants recounted sad stories, but they also told tales filled with hope. She took inspiration from the idea that hospitals are dichotomies of purpose. 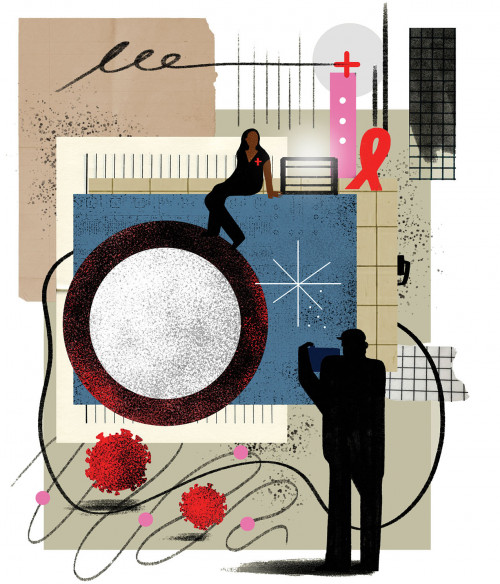 Humans of Penn Nursing–a take on photographer Brandon Standon’s wildly-successful Humans of New York project– has shared the stories of more than 75 people affiliated with Penn Nursing since its launch in Fall 2019.

Initially, organizers hoped the project would build relationships and encourage community, said William Parker,were invited to submit 500- word personal stories on any subject. The response, to the request for submissions and to the project, was immediate.

“I knew that it was being well-received by the community because I had people in the building stopping me in the hallway, asking, ‘When’s the next one going to come out?’” Parker says.

The project became even more crucial to the community after the COVID-19 shut
down eliminated those casual in-person interactions by addressing a shared hunger for connection during a time of isolation.

Melanie Martin RN Nu’21 recalled the hours she’d spent with a dementia patient whose agitation was best addressed with music, not medication. Augustine Cassis Obeng Boateng MPH GR’20 described being in the Beijing International Airport in late 2019 and seeing health care workers in PPE carrying what appeared to be dead bodies. He didn’t think much of it at the time.

“We don’t have opportunities nowadays to have these one- on-one chats, so to have it packaged in a neat way that’s consumable in 30 seconds or a minute is a good way to learn about someone’s background,” says Assistant Professor of Nursing Dalmacio Dennis Flores, who offered a story of his own. “It’s nice to see some commonalities as well as the myriad of very surprising ways people come to the profession.”

Flores’ Humans of Penn Nursing described speaking at a United Methodist Church convention about HiV prevention and homophobia in 2012 as church leaders were debating its official stance that homosexuality was “incompatible with Christian teaching.”

At one point, after one of Flores’ comments, “the room erupted in a guttural groan of collective distaste that I thought only occurred in movies,” he wrote.

But he shared the story because he wanted to reinforce to his students that standing up for what they believe is right is never wrong.

“We’re surrounded by students who are keen to make change in the world,” he says. “We’re troublemakers. We’re nurses. Society can count on us to call things out.”