One mild saturday at the end of October, 310 patients greeted the morning, ready to embark on their relocation from the Hospital of the University of Pennsylvania (HUP) to a brand-new 17-story, 1.5 million-square-foot expansion. Over at the elliptical, copper-hued building—the University’s largest-ever capital project—designed by Foster + Partners and HDR, balloons lofted through the air, as did the dulcet tones of a trio of brass players from the Philadelphia Orchestra. University leaders gathered near Maya Lin’s graceful sculpture—at once evoking the branches of a molecule, a soaring tree, and the meandering Schuylkill River—for a ribbon-cutting to officially open the complex. The wood-paneled lobby re- sounded with applause and cheers. 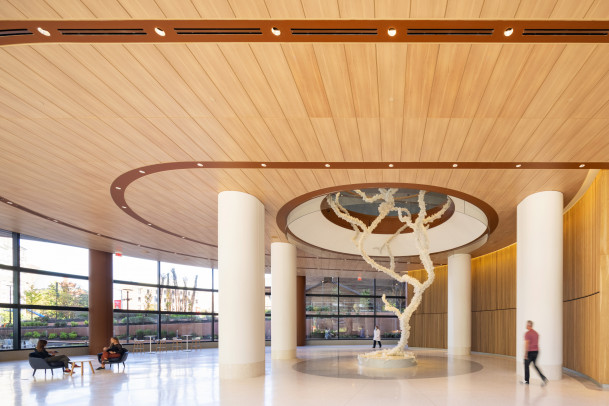 And then the work began. Penn Nursing and Penn Medicine volunteers took their places to ensure that the transport went smoothly. Nurses joined their patients at the bedside and accompanied them as they were wheeled across the street. More staff awaited there, guiding them to the private rooms where they would spend the rest of their hospital stay. The product of extensive training and rehearsals, the choreographed exactitude of the relocation represented the culmination of years of design, troubleshooting, re-design, and finally construction. “This didn’t just happen overnight,” points out Antonia Villarruel PhD RN FAAN GNu’82, Professor and Margaret Bond Simon Dean of Nursing. “And I’m so proud that nurses have contributed since the start. They are the ones who are with the patients 24/7. They know best what they need to make sure that patients get what they need.”

That involvement started at the top, with HUP Chief Executive Officer Regina Cunningham PhD RN NEA-BC FAA GR’03, a nurse and Penn Nursing alumna. And Penn nurses were a vital part of PennFIRST, a team assembled by Penn Medicine to ensure that clinicians and other staff worked closely with representatives from the design and construction partners throughout the process. For years, everyone gathered together in a designated office not far from the construction site. As the building began to take shape, the team staged walk-throughs of a full-scale foam and cardboard mockup of an inpatient floor to test how the design lent itself to typical workflow and patient mobility challenges. Their suggestions—most notably for increased elevators—were implemented.

The result is a $1.6 billion state-of-the-art facility that keeps the focus on patient comfort and privacy while allowing clinicians to more efficiently and safely deliver care for the most critically ill cardiac, transplant, neurological, and cancer patients. One component is the way in which each patient floor is laid out. The 504 single-patient rooms line the outer corridors of the building—ensuring plenty of natural light for each—while the clutter of food carts, supply rooms, and medical equipment remains hidden in an inner core, accessible only to hospital personnel. Another design innovation is the ability of rooms to transform into intensive care units (ICU), and back to step-down rooms—allowing the hospital to flex in times where ICU needs surge. As part of Penn Medicine’s bench-to-bedside mission, research labs pertinent to the care specialties are situated on the same floors as patient rooms.

The rooms themselves are laden with hotel-like amenities. They feature seating areas with sleep sofas for family members, expansive bathrooms, and 75- inch smart televisions, which also act as a command central for the room. Using a pillow speaker, patients can control not only their entertainment, but also the room’s privacy glass, window shades, zoned lights, and temperature through the smartboard technology called IRIS. The digital whiteboard also provides the name and photo of members of their care team, as well as helps them keep track of their goals, appointments, and treatment regimens.

Now that the Pavilion has been up and running for several months (it opened October 30, 2021), it’s become an integral component of the training that nursing students receive as part of a practice partnership with Penn Medicine. “The Pavilion represents the wave of the future and such facilities are few and far between,” observes Rosemary Polomano PhD RN FAAN Nu’76 GNu’79, Associate Dean for Practice. “Students have opportunities to interact with cutting edge technologies, including highly integrated patient monitoring systems.” From a teaching standpoint, she adds, the ways in which the building’s design facilitates nurses’ work processes by storing the patient’s electronic health records and medications at the point of care, has been re- ally helpful for clinical instructors, too; as has IRIS, the smart TV which can be loaded with test results and supportive educational material to enhance practice lessons.

Of course, for the thousands of HUP staff members who will be coming in and out every day, the building offers the same opportunities. But for them its newness also presents the challenges associated with getting to know any new workspace. To ease the transition, Dina Bammer MSN RN NPD-BC CNOR GNu’11, Nursing Professional Development Specialist, narrowed in on who needed familiarization in which spaces and how many hours training they required. “We ended up with 24 different orientation programs,” she says. “They were population-based for specific types of physicians or nurses or support staff.” Everyone received a one-hour tour of the facility, including training on how to safely evacuate patients should there be an emergency. Virtual presentations and specialized tours with coordinated scripts, maps, and floor stickers followed. “We had 15-20 groups walking through every single day from July through October,” elaborates Bammer, “and we tapped into frontline workers interested in being leaders as our ambassadors. The teams appreciated that their tours were delivered by peers. It was great for buy-in and generated a lot of excitement and energy.”

What nurses found when they first stepped in the building included special elevators that dropped them right in the internal core reserved for staff. This set- up features collaborative spaces for interdisciplinary teams to come together uninterrupted to perform patient care simulations and discuss care approaches- es, as well as spaces for educational presentations, such as demonstrations of new products. Personal spaces such as locker rooms, break areas, wellness areas, and even lactation rooms are also clustered in the core. “Every single patient care floor offers customized opportunities for nurses to enjoy some restoration and privacy,” adds Bammer.

There’s no doubt that presenting self-care options—from aromatherapy to massage chairs—for nurses helps not only them but ultimately their patients. But the real core of the Pavilion remains its emphasis on enhancing patient well-being.

A simple streamlining tweak like in-stalling built-in cabinets in all patient rooms—called patient servers—that are stocked with necessary dressings, syringes, needles, and medications “enables nurses to not only have a less chaotic workflow,” points out Colleen Mattioni DNP MBA RN CNOR, HUP’s Chief Nursing Executive, “but also to spend more time in the room with the patient. There are huge efficiencies— rather than having to come and go from patient rooms, they can be talking with the patient while gathering meds and supplies.” Similarly, the capability to control frosted privacy glass from the outside helps nurses check on their patients in the evening without disturbing their sleep by opening and shutting the door or turning on the lights. “Patients also love the IRIS feature that identifies who they are meeting with and their role,” adds Mattioni. “And during the pandemic when everyone is masked, attaching a smiling face to a badge seems especially important.”

“There is so much tech to learn for this new building,” she continues. “I think as nursing moves into the future, it’s something we’re always going to have to lead in. At the same time, making sure that the focus remains on the patient, and that a human connection is continually fostered, will always be front and center.”