Why caregiving became a crisis in our country, what the federal government is going to do about it, and how Penn Nursing is shaping the conversation.

At a glance, the Savioke Relay robot brings to mind a 3-foot tall Bluetooth speaker. With the help of wheels beneath its base, the cylinder-shaped robot roams the halls of hotels and hospitals, delivering supplies to staff. But soon, it could take on a weightier task—helping older adults with basic self-care challenges such as retrieving items, and thereby, providing some relief for their caregivers. Pamela Cacchione PHD CRNP GNP BC FGSA FAAN, Ralston House Endowed Term Chair in Gerontological Nursing and Professor of Geropsychiatric nursing, has been investigating ways to retrofit Relay. As part of a National Science Foundation Grant, one of the engineering students she collaborated with managed to modify the robot with an extending arm capable of retrieving objects from cabinets and off the floor. In a recent successful trial, older adults played a bean bag toss game and the Relay returned the bags to the participants. Cacchione has designed a range of nursing intervention technology including a sock that monitors the wearer for warning signs of heart failure. Roads, Bridges, and … Caregivers? Why caregiving became a crisis in our country, what the federal government is going to do about it, and how Penn Nursing is shaping the conversation. By Miles Howard Policy But now, one of the most salient thoughts on Cacchione’s mind is how to get interventional devices like these into more homes and spaces where care is being rendered to older adults and people with disabilities. “We want to design low-cost technologies that are within reach for people—which will also decrease costs in the long run,” Cacchione says. “We have to figure out how to deploy technologies that support more caregivers. We need to think about them from a social justice viewpoint.”

In the United States, stratified access to caregiving technologies is just one example of how caregiving, as an essential good, is compromised by structural inequalities: many of which have been exacerbated by the pandemic. Nearly 1 million elderly and disabled Americans from lower-income communities are currently on a waitlist for receiving in-home caregiving services. Professional caregivers, most of whom are women of color, have been historically underpaid. North Dakota currently offers caregivers a yearly average income of $34,020—the highest of any state—but this metric falls well below North Dakota’s $52,450 median annual income for all occupations. Worse yet, a shortage in the U.S. caregiving workforce points to the dearth of benefits and support for those in the profession: most crucially, childcare. And then there’s the estimated 50 million Americans providing unpaid caregiving to their own family members, often to the detriment of their careers and their quality of life. The state of caregiving in the U.S. is dire, and the Biden administration is looking to respond to the crisis in an unprecedented way—by folding caregiving into infrastructure spending. On the heels of the American Rescue Plan, which increased Medicaid funding for caregiving services, President Biden and the Democratic Party’s proposed “two-track” infrastructure package would address the shortcomings and inequities of America’s caregiving system at their roots. The first track of the plan—a $1.2 trillion infrastructure package with funding for America’s roads and transit services—cleared the Senate in early August. But the larger $3.5 trillion package within the plan (to be passed via budget reconciliation with a simple majority vote) includes $400 billion for growing the caregiving workforce, expanding caregiving access to underserved communities, and boosting caregivers’ wages and benefits: including the right to unionize. The Biden administration is pursuing a structural rebuild but also, a paradigm shift. The infrastructure bill could be a step toward making caregiving as endemic to American life as highways and bridges.

Biden’s proposal is well-timed. The stressors and economic turmoil of the pandemic have been especially difficult for caregivers, both paid and unpaid. “[During the pandemic] we lost a large number of caregivers who would otherwise have been able to go into people’s homes and care for aging people or people with disabilities,” says Mary Naylor PHD RN FAAN, Marian S. Ware Professor in Gerontology and the Director of the NewCourtland Center for Transitions and Health. Naylor points to the fear of contracting COVID-19 and limited access to childcare as key factors that forced many professional caregivers out of the workforce. Unpaid caregivers—usually family members—have struggled to keep up with the heightened demands of mid-pandemic life while bearing the weight of rendering care. In a recent national study on unpaid caregivers by the Massachusetts-based caregiving services platform ARCHANGELS, 70% of the study subjects reported dealing with adverse mental health symptoms during the pandemic, and 53% of those caring for both older adults and children had experienced suicidal thoughts.

Naylor and her colleagues at the NewCourtland Center have witnessed these residual effects of unpaid caregiving up close, through their research with older adults’ transitional experiences as they navigate a maze of hospitals, skilled nursing facilities, and in-home caregiving. “Early in our work, it became very apparent to us that we needed to support the health of individuals caring for their family members as much as the older adults experiencing health problems,” Naylor says. “Much of what we’ve learned about caregivers’ needs has been through stories: trying to understand the journey for people as they support others making these vulnerable transitions. [Caregivers’] goals often depend on the relationship they had with the individual to whom they’re rendering care, how much help a family member needs, or how long they’ve been doing it. Many want someone to tell them what to do. What medications does my dad need tomorrow? Others want to understand the sources of support they can get from the community. Most also need emotional support.”

The staggering scale of unpaid caregiving in the U.S. begs the question of why professional caregivers have been historically underpaid and overworked, to the point where many are now leaving the workforce. Part of the problem stems back to the New Deal. Roosevelt’s legacy legislation neglected to extend federal protections to home care workers. It was a compromise with Southern Democrats who were skittish about boosting wages and benefits for a largely Black profession. This exclusion stunted the growth of the caregiving industry. It wasn’t until 2013 when the minimum wage and overtime protections of the Fair Labor Standards Act (a part of the New Deal) were extended to paid caregivers by the Obama administration. For President Biden, a more sweeping update of wages and working protections for professional caregivers would be something of legislative sequel: bigger and better.

The end result, ideally, would be historic growth in the caregiving industry and thereby, the ability to meet America’s growing demand for caregiving services. (By 2030, the Baby Boomer generation will be 65 or older.) But that’s not all that $400 billion of public investment in caregiving would yield. Some of that federal funding could also be leveraged by states to expand their offerings of community-based support services that often precede or prevent the need for in-home caregiving. Nancy Hodgson “We have to figure out how to deploy technologies that support more caregivers. We need to think about them from a social justice standpoint.” PHD RN FAAN, Claire M. Fagin Leadership Professor in Nursing, knows how effective reimbursable long-term services can be for older adults who are experiencing cognitive impairment, as well as their families. Assistance with meals, transportation, and day programs can be a first tier of caregiving support. The next tier is more interventional home and community services. These could include technology such as the robot and heart monitoring socks developed by Cacchione, or they may involve bringing new services to venues that offer Programs of All-Inclusive Care for the Elderly (PACE). Hodgson and her team are currently receiving funding from the National Institute of Aging to implement an evidence-based dementia program in PACE settings nationally. “PACE is a Medicare and Medicaid reimbursed program that provides care for older adults in the community, instead of a nursing home or long term care facility,” Hodgson says. “It is an exemplar of an expanded definition of caregiving infrastructure.”

Of course, for many Americans and their families, better access to caregiving facilities such as hospitals and nursing homes will be crucial in the years ahead. Insufficient proximity to such facilities can be a significant impediment to caregiving in rural and lower-income communities. It would take more than a single infrastructure package to bridge those gaps. But Sharon Y. Irving PHD CRNP FCCM FAAN FASPEN, an Associate Professor of Pediatric Nursing and Vice-Chair for the Department of Family and Community Health, sees America’s nursing workforce as a near-term piece of the solution. 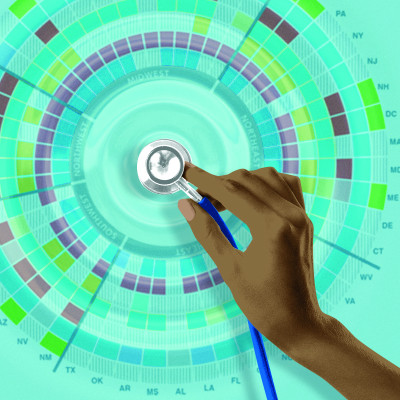 Irving’s idea, if realized, would be more of a supplement to the caregiving growth recipe within the infrastructure package. It would require additional legislation, possibly at a state level, to empower nurses to provide more support to caregivers or adopt a managerial role. But thinking about caregiving as a form of infrastructure gets to an important reality about the challenge of fixing America’s caregiving system—it cannot be done in isolation, or with one ambitious bill.

Ultimately, infrastructure is intersectional. Deteriorating roads or public transportation can add time (and stress) to a person’s commute. It can make them late for their job. If this person is also caring for a family member, unreliable transit infrastructure can jeopardize their ability to render care. Adriana Perez PHD ANP-BC FAAN, an Assistant Professor of Nursing whose research involves older Latinos with mild cognitive impairments, sees a similar crossover between caregiving and access to housing that’s affordable and conducive to their needs. “Because most people relate infrastructure to the physical aspect of life, that could include renovation and retrofitting of houses, apartment buildings, and nursing homes where people are receiving care,” Perez says. “The home can be an anchor for individuals and families, overall. In the Latino community, a common goal is to keep grandparents and elders at home. So many could benefit from having renovation support in their homes, because of stairs that could cause a fall, or things like that.”

Hence the importance of the paradigm shift that Biden’s infrastructure package seems designed to initiate. By treating caregiving as infrastructure, a new precedent is set—that the government must ensure broad access to the physical and human resources that make caregiving possible. Improving the working conditions for paid caregivers and extending support services for unpaid caregivers will have a tangible effect. But it also poses the exciting question of what else constitutes infrastructure? What other goods, services, and policies would improve caregiving experiences and outcomes? As Cacchione sees it, most of us will ask that question, at some point or another. “There are many, many caregivers out there who do not even recognize that they’re caregivers,” Cacchione says. “I often spend weekends caring for my parents. It starts with providing a little something and then, as their needs increase, it’s doing the shopping, laundry, appointments, and medication management. It sneaks up on you.”