All around Penn Nursing, students are volunteering, teaching, organizing, and conducting research with one shared goal: to make the world a fairer place.

Christin Iroegbu, MS, RN, was working as a transplant coordinator at Johns Hopkins Hospital when she noticed an unsettling trend: many Black and Latinx patients coming in for kidney transplants didn’t know why their kidney disease had advanced so quickly, or even how they’d developed it in the first place.

When she tried to explain, “I would always hear them say, ‘If I had known this before, I would have made better decisions,’” Iroegbu remembers. “It all seemed to revolve around a lack of health care knowledge.”

The inequity was so glaring, sitting right in front of her day after day. She wanted to understand why these minority patients hadn’t received as much education about their disease process as white patients had. Even more so, she wanted to close up that gaping knowledge gap. But how?

As months passed, Iroegbu began to wonder if research could help her figure out the answers. Now she’s a PhD student at Penn Nursing, studying how the social determinants of health affect people’s awareness of chronic kidney disease—and hoping that her research directly improves health equity.

Iroegbu isn’t the only one at Penn pouring herself into social justice work. All over the Nursing school, students are chipping away at projects large and small. And whether they’re caring for underserved patients at community clinics, championing Census participation among minorities, or fighting to end inequity and racism in health care, these motivated students all share the same vision: a fairer world.

“Our students tell me all the time that they came to Penn Nursing because they are very much interested in social justice, and we’re known for that,” says Lisa Lewis, PhD, RN, FAAN, Penn Nursing’s Associate Dean for Equity and Inclusion. “This work is just in every breath and fiber of our Nursing students.” 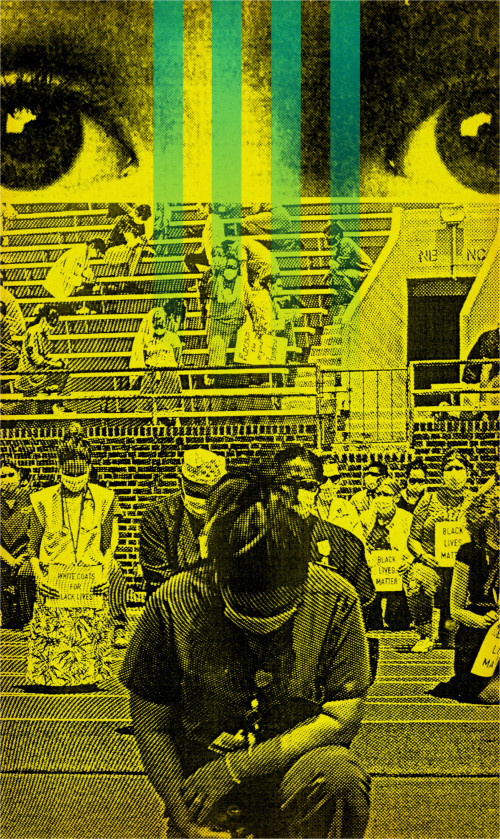 Like Iroegbu, Rachel French, BSN, RN, was already working as a nurse when she clocked the disparities that are now driving her dissertation research. Fresh out of Boston College with her BSN, she’d been placed at a federally qualified health center in Idaho through AmeriCorps. French performed intakes for people struggling with opioid use disorder (OUD), many of them uninsured or on Medicaid. She took down their histories—and heard about the difficulties they’d had finding health care.

By the time she came to Penn as a PhD student in 2018, French knew she wanted to root her research in health equity. “It’s part of the fabric of our world,” she says of social justice. “You can either engage with it or not, but there are so many things that are the way they are because of systemic oppression.”

Now French is focused on how the organization of nursing— nurses’ staffing levels, educational backgrounds, and work environments— affects the outcomes for surgical patients who have opioid use disorder. Her hypothesis is that a better organization of nursing will lead to better results for all patients, but especially those with OUD, given their complex needs.

“I’m always thinking about how to incorporate the tenets of social justice into this work,” she says.

Whatever first attracts people to social justice work, it’s not unusual for them to land in nursing, just as French eventually did. (Before choosing it for her undergrad degree, she went through “basically every major in the books,” she says, from political science to math to sociology.)

“From the beginning of time, nursing is social justice,” Lewis says. “Nursing has always been known for providing care to the underserved. I think the profession draws individuals who, at the core of everything, want to serve and to help and to be a voice for people who cannot speak for themselves.”

Their clinical work gives nurses a constant, close-up view of inequity and injustice. “I think all nurses are trained to be holistic in thinking, and to consider every component of a patient: environmental, physical, and social,” says Marguerite Daus bsn rn, a PhD student who is analyzing hospital readmissions among older Hispanic patients. And when you maintain that multi-pronged view, treating patients of all stripes day after day, it inevitably leads to a deeper awareness of social justice issues.

TAKING ACTION, TOGETHER OR ALONE

For Shanaya Cross, Nu’21, it all started with a poster inside a bathroom stall her freshman year. The paper announced a meeting of the Minorities in Nursing Organization—a student club founded at Penn in 2001. Intrigued, Cross showed up. She’s been a member ever since.

In MNO, Cross found a group that’s focused on supporting minority Nursing students while also tackling broader social justice work. Last fall, MNO wrote a letter to the Mayor of Philadelphia demanding permanent, ultra-low-income housing for people who are currently living in homeless encampments—and asking the City to keep those encampments intact in the meantime. “We serve to encourage our members and followers to take action and use their voices against injustices,” says Jada Edwards Nu’21, the vice president of MNO.

In October, MNO and the Asian Pacific American Nursing Student Association organized a virtual event focused on racism in health care. “It was about how rooted racism is in health care, why that is, how that still manifests—but also what we can do as the next generation of nurses,” recalls Casey Cheng Nu’22, the current president of APANSA.

Other student activists have landed in Community Champions, a service learning organization for Nursing undergrads. That’s where Delia Levine Nu’21 has been volunteering since her sophomore year; now she’s one of the group’s co-leaders. Though some initiatives are on a pandemic-induced pause, in past semesters the group has offered weekly blood pressure screenings to West Philly residents, assisted in diabetes self-management courses for South Philly’s Latinx population, and answered health-related questions from the homeless community at a weekly meal service.

This semester, Levine and the Community Champions are trying to make nursing education accessible for anyone in Philadelphia. They’re developing resources for high school guidance counselors and the Latinx community, with info for anyone interested in becoming a nurse— including local school options and financial aid opportunities.

The group collaborated with APANSA last fall to champion the 2020 Census and voter registration among West Philadelphians. They also helped distribute masks, care packages and informational pamphlets on Covid-19 to local neighborhoods.

“We all have our own reasons for why we were drawn to this,” Levine says of Community Champions. For her, it circles back to terms like “caring for the whole person.” “In those little phrases we throw around, there are so many people that are not included right off the bat,” she says. “I think it’s not right to say those things when we know that the reality is very different for a lot of people.”

“We have the time and we have the resources,” she adds. “It’s our responsibility to do something with that.”

As she continues her doctoral work, French also engages in justicedriven volunteering. As a community organizer with SOL Collective, she stuffs the opioid reversal drug naloxone into envelopes and ships it out to anyone in Philly who requests it. Working with postdoctoral fellow Shoshana Aronowitz, PhD, CRNP, GR’19, French has even managed to infuse research into community work. She and Aronowitz are combing through the demographic data that people requesting naloxone-by-mail provide, trying to determine how closely those receiving it match the program’s target demographics.

“I think it’s kind of rare that people who are doing [volunteer] work in certain communities are also the ones doing research on those communities,” French says. “It’s a cool opportunity to bridge that gap.”

She and Aronowitz have a paper about their findings under review already and a second in the works. 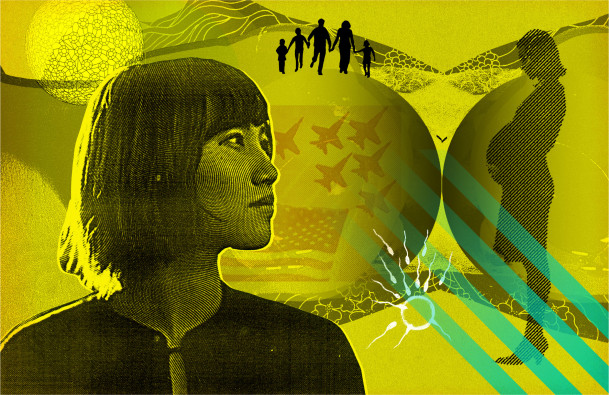 PhD student Caitlin Clason’s MSN WHNP-BC research is highly personal. As a U.S. Army veteran who served from 2006 to 2013—and deployed to Afghanistan in 2010 and 2012—Clason saw firsthand how women’s health was treated in the 80-percent-male military. When she got pregnant shortly after returning from her second tour of Afghanistan, she also realized how under-prepared most OBGYNs were for her questions.

She was worried about how the burn pits she’d been near could affect her pregnancy, whether the anthrax vaccine she’d been required to get carried any risks, and how exposure to noise and stress and jet fuel while deployed could impact her health. “There’s a big difference between the average risks of pregnancy and if you have military service in your background,” she says.

“I finally came across an obstetrician who told me, ‘Listen, I have gone to [PubMed], and there wasn’t any research on female veterans regarding pregnancy and risks,’” Clason remembers. “I started to think, this research gap is something I can address.”

Now a nurse and the mother of two young children, Clason is focusing her career on female veterans’ health. “It was the whole reason I went into a PhD,” she says. “If I were told one day that I couldn’t study female veterans, I’d go back to a full-time clinical practice, because I’d be wasting my time [in academia] as far as I’m concerned.”

Eventually she’d like her work to result in a research-backed information sheet for all health care providers, outlining what to monitor for in female patients who served in the military.

“When the research gap is this large,” Clason says, “any scientificbacked information that comes out is an achievement, so that providers can make good, informed decisions about appropriately treating this population.”

Clason’s one of many Nursing PhD students who have landed on research as their preferred tool for social change.

When Iroegbu worked as a research nurse at Johns Hopkins School of Nursing, “I saw that with just an idea or an intervention, through your research, you could affect not only the people you work with, but also people you may never even meet,” she says.

She’s hopeful that her own work will lead to interventions and programs that mitigate—or even eliminate— barriers to health for people of “lower social position.” Her focus will stay on kidney disease, but “my hope is that my work can be replicated to other chronic illnesses: diabetes, high blood pressure, cardiac disease, asthma,” she says.

All of the layers of nursing are important,” Lewis notes, “but I think research allows us to develop, create, and test theories and interventions that make a bigger impact on patient care.”

“I chose nursing because I was interested in research, working clinically, being involved in advocacy— and nursing provided all of that,” she says. “In thinking about the health of formerly incarcerated people, nurses can be involved at so many different levels.”

Like Clason and Iroegbu, Addison’s focus sprang from personal experience. When she worked at a psychiatric hospital in Philly, “I distinctly remember having patients who had ankle monitors,” she says, “and how clinicians responded: ‘Ooh, that person just got out of jail.’ There was a stigma attached to it, including among other patients.” Considering the effects of that stigma, and of incarceration itself, on Black men’s mental health led straight to her current research.

Addison is eager for her work to spark change and improve people’s lives. “I’m hoping it will lead to building stronger coalitions in the community,” she says, “in which people released from incarceration aren’t struggling to meet all their different needs by going to all these different places.”

Her how and why are different from Clason’s or Iroegbu’s, just as French’s are from Cheng’s or Levine’s. Though they’re all passionate about social justice, they also bring their own inspirations and lived experiences to their work. But Lewis is quick to point out the big commonality among them: “They are all nurses,” she says, “and being a nurse means that social justice should be at the forefront of everything you do.”