How a Penn Nursing alum and NICU nurse simultaneously saved a preemie’s life and taught a master class in innovation.

When a couple from Brooklyn, NY prematurely gave birth to twin sons in 2017, nothing could have prepared them for the rollercoaster ride they faced when one of their sons struggled to thrive in the NICU. In came a recent graduate from Penn Nursing’s BSN program, who after just a few hours with their child, was able to correctly identify what might be causing the problem. Using a combination of innovation, nursing know- how, and leadership skills—a clear demonstration of the Penn advantage— nurse Elizabeth Durfee, RN, CCRN, Nu’16, was given approval to try her solution, and within 24-hours, the infant was on the road to recovery. Read on for a firsthand account from the father of these twins—who are now happy, healthy, and very active two-year-olds—of how nurse Elizabeth took an innovative approach to save his son’s life.

On July 29th, 2017, my twin boys, Davis and Pierce, were born. It was one of the most exciting days of my life, but also scary and filled with uncertainty. They were due to be born in October, but they decided to come early at 29 weeks (clearly their father’s sons; their impatience got the best of them and they just couldn’t wait any longer to start experiencing the world!)

Amazingly, three years after writing an article on how nurses are the key to innovation in health care, an innovative nurse saved my son Pierce’s life. Davis was born first at an auspicious 1:11 in the afternoon. Pierce came 4 minutes later in the position called “Sunny Side Up”—face first and wide-eyed with his tongue sticking out and a look that seemed to say, “Dad, I know you’re probably worried, but I’m going to be just fine (and keep you on your toes)!”

Davis cruised through his stay in the NICU with essentially no issues. Pierce, on the other hand, after two smooth weeks, began to experience breathing issues.

Like many babies born at 29 weeks, Pierce had a tube put in his lungs to help him breathe. Fortunately, this only lasted his first couple of days. He progressed to the synchronized inspiratory positive airway pressure (SiPAP) machine, which delivers air with alternating pressures through a mask.

Some days, Pierce responded really well to the SiPAP mask. On other days, however, he would have multiple episodes of bradycardia and/or desaturation, where his heart rate would slow, causing oxygen levels to decrease to dangerously low levels. When these measures would drop below a certain threshold, alarms would ring, and nurses would rush over to increase the oxygen.

This was an incredibly time for us. On our daily visits to the NICU during this period, it would often be a real-time decision as to whether the care team thought that Pierce was up for “kangaroo time,” also known as skin-to-skin. Sometimes, after walking the mile-plus in the scorching August heat of NYC, I’d arrive to find out that I couldn’t hold Pierce. Other times, we’d start, but he would quickly have an episode that required him to be put back in the isolet.

Meanwhile, the SiPAP mask was causing breakdown on Pierce’s nasal tissue, resulting in a very painful looking sore between his nostrils. My wife and I during this time would tell each other that we thought Pierce looked great and was coming along. The truth of the matter is we were both terrified that the mask was going to cause long-term damage to his face and ability to breathe through his nose.

The incredible team at NYU tried everything to get a handle on Pierce’s issues. They attempted different size masks. They would alternate mask sizes to try to minimize the risk of damage to Pierce’s face. Tests for infection always came back negative, and overall his vitals were strong. Strangely, some of the times they would remove the mask, he would respond better than with the mask on. But when they tried to lower the air pressure to wean him towards breathing room air, he would regress. No one could figure out what was causing his episodes.

At the lowest point, one of the head doctors told us that they were on the verge of considering a course of steroids to help propel Pierce’s lung growth. While they were only proposing using a miniscule dosage, at larger amounts, that particular medicine had been proven to cause neurological delays. We obviously hoped to avoid this however possible, but there didn’t seem to be any other options. 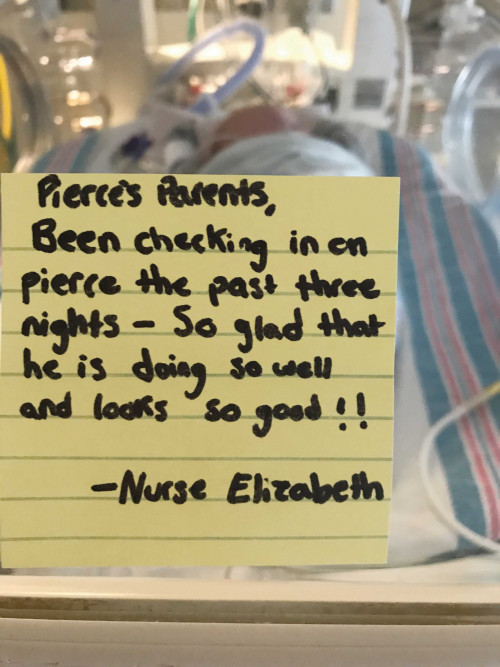 Fortunately, the brilliant and innovative nurse Elizabeth Durfee, Nu’16, figured out what was really going on before we had to resort to this drastic measure.

During one of our nightly calls, we got a very different response than a basic recounting of how many episodes happened that day and the (hopeful) gain of 60 grams.

When Elizabeth picked up the phone, she was so clearly excited to hear from us. “I’m so glad you called! I think I’ve figured out what is going on with Pierce. It’s the mask! Because of the breakdown on his nose, the mask hasn’t been sitting properly. Rather than helping, I think the mask is actually blocking his air passage, causing his episodes.” A stunningly counterintuitive insight!

We were immediately on the edge of our seats listening with rapt attention.

She continued, “Here’s what I want to do. I’m going to see if the doctors will agree to let me try him on CPAP and see how he responds to that. Assuming that he responds equally well to the CPAP, that will help show that the higher pressure of SiPAP in combination with the mask isn’t as effective as it should be. Therefore, it would make sense to try a different delivery vehicle like the highflow canula. What do you think?”

We were up all night, waiting to see how this experiment was going to go, and if it would even happen at all.

Finally, at about 6am I couldn’t wait any longer. I called Elizabeth.

When Elizabeth came to the phone, she was ecstatic. “It worked! Pierce didn’t have a single episode. I’m pretty sure that we figured it out. I’m so happy!”

I can’t even begin to describe the feelings of joy, relief, and overall excitement we had at this news. I quickly showered and rushed over to the NICU to see Pierce and meet this miraculous nurse.

Pierce immediately looked like a completely different baby. He went from labored breathing, where each breath was a Herculean effort, and a clear look of discomfort on his face, to a serene, peaceful-looking angelic baby breathing easily. All in one night!

Elizabeth had just left, so I didn’t get to meet her that morning. She did leave a note a few days later saying how thrilled she was to see Pierce doing so well. I carried that note in my wallet for the first year of his life, and now keep it in a very safe place. It’s something I will always treasure.

We did finally meet a couple of weeks later and remain in touch. She will always be a hero to me and a very special part of our family.

Not only did Nurse Elizabeth save my son, she also taught a masterclass in innovation.