Winding Down the Influenza Pandemic

As we wrap up our series Calm, Cool, Courageous, we take a look at the fatalities and the silence surrounding the tragic event.

Although the flu pandemic lasted nearly two years, the most intense period was in the late summer and early fall of 1918. Approximately two-thirds of the total deaths from influenza came in just 24 weeks, and most from mid-September to early December. Between 50 million – 100 million people died worldwide; in comparison, there were 18 million fatalities in the First World War. This strain of influenza in 1918 killed more people than AIDS has killed since 1981.

More than 25 percent of the U.S. population became ill and approximately 675,000 Americans died. Most victims of influenza would make a full recovery; however, those who died were mostly young adults. Traditionally young children and older adults are more likely to die from influenza or complications from influenza, such as pneumonia. On a chart by age, it would be a U shape. In this outbreak, young adults were dying, making a W shape in a chart by victim age. 15-30 year olds’ death rate was 20 times higher than the previous year, and life expectancy dropped by 10 years. Of reliable statistics, the highest total of deaths by age range were 25-29, 30-34, and 20-24. In each range, the numbers were higher than a combination of adults age 60 or older. 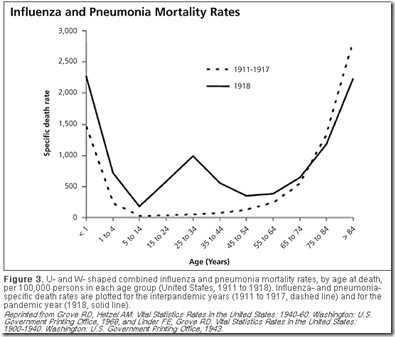 In Philadelphia, over 12,000 people died and tens of thousands more fell ill. The pandemic shut down a city of over 1.75 million people for weeks. Afterwards, people moved on and the city began to function again. There was little written in the months after the pandemic. Most people forgot about… Perhaps it was the sheer number of victims, or perhaps because it struck those who would have recounted or passed on the stories. One of the few accounts is Katherine Anne Porter’s Pale Horse, Pale Rider.

Nurses were at the forefront of care. Doctors had few resources and few medicines to assist at the time though they did their best. Nurses, along with nursing aides and volunteers, kept patients clean, fed, and treated with rest and ice. Historian Nancy Bristow argues that medicine failed but nurses gained public esteem for their efforts during the pandemic. Whether it was in the home or in the hospital, nurses made their rounds to as many patients as they could, saving those when they could.

Nurses put their bodies on the line knowing they themselves could, and would, contract the same illness. The nurses remained professionals. They remained calm, cool, and courageous in the midst of the deadly outbreak.

The Genesis of the 1918 Spanish Influenza Pandemic https://www.youtube.com/watch?v=48Klc3DPdtk